Jang is the winner of the third annual "Choi Dong-won Award," named after the late former All-Star and the 1984 MVP in the Korea Baseball Organization (KBO).

The award was created in 2014 to recognize the best homegrown hurler in the nation's top competition.

Jang, 31, tied his career high with 15 wins this season, while also posting a 3.32 ERA in 27 starts. He struck out 137 and walked 76 in 168 innings. Jang also has 19 quality starts (with at least six innings pitched and three or fewer earned runs allowed).

One of the league's most durable pitchers, Jang has logged at least 100 innings in 10 of his 11 KBO seasons, and has reached double figures in wins in each of the past seven years.

Jang won six of the seven votes cast by the jury, which included former and current KBO managers.

Only Korean-born pitchers are eligible for the award, and they must meet one of seven criteria: 30 starts, 180 innings pitched, 15 or more wins, at least 150 strikeouts, at least 15 quality starts, an ERA of 2.50 or less and at least 40 saves.

Seven pitchers were eligible for this year's award. 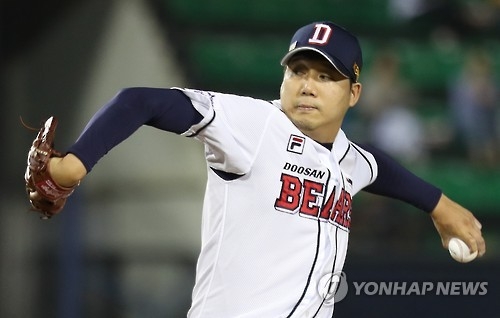 The jury noted that with the offensive production in the KBO at an all-time high, pitchers will have to step up their game.

Starting next year, the award committee will ease some of the eligibility requirements. The minimum ERA will be raised from 2.50 to 3.00, and the required number of wins will be reduced from 15 to 12.

The formal award ceremony will take place on Nov. 11 in Busan, a nod to Choi's jersey number, 11, that he had while he was pitching for the Lotte Giants based in the southeastern port city. Jang will receive 20 million won (US$17,920).

Choi earned the moniker "Iron Arm" for his uncanny ability to go deep in games and to pitch on a short rest. His signature season came in 1984, when he made 51 appearances, including 20 starts. He went 27-13 with six saves, with 14 complete games and four shutouts. He had a 2.40 ERA in 284 2/3 innings, and had 223 strikeouts, which stands as the all-time single-season record.

In the Korean Series that year, Choi made five appearances in the seven-game set and went 4-1 to help the Giants past the Samsung Lions. Choi, who tossed 41 innings in a 10-day span, remains the only pitcher in league history to win four games in the championship final.