Besides going to Hanawon, Powers toured the truce village of Panmunjom on the inter-Korean border. The trip aimed to send a strong message of Washington's resolve to counter all North Korean threats.

She met with Lt. Gen. Thomas Vandal, Commanding General of Eighth Army, had lunch with troops and inspected various facilities including the conference building of the Military Armistice Commission. 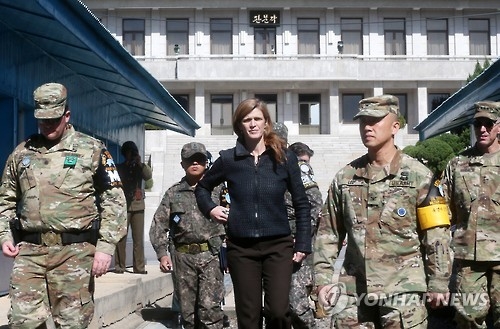 Powers then met with Prime Minister Hwang Kyo-ahn and pointed out that 2016 saw the North breaking numerous international laws and that its actions are becoming more threatening. She said that while the UNSC resolution passed in March reflected many of Seoul's ideas, sanctions so far have not been able to curb the North's provocations.

Hwang highlighted the need to elicit "strong and comprehensive" international responses to the North's latest nuclear provocation, saying these responses should be at a level "beyond Pyongyang's expectations."

Hwang also said that even after its fifth nuclear test, the North has been "explicitly" threatening the South, the U.S. and the international community with a series of verbal threats, including one to bolster its nuclear forces.

Touching on the North's abysmal human rights record, Hwang said that it is an "urgent" humanitarian issue that can no longer be postponed.

Power, in response, said that Seoul and Washington, along with the United Nations, will strengthen cooperation in improving the rights situation in the impoverished state, according to Hwang's office.

Her remarks with Hwang following the envoy urging North Korea upon her arrival in the country to stop any further nuclear provocations, stressing that the world will "not be intimidated" by any actions taken by the Kim Jong-un regime.

"Now we are looking to see what more can be done because, of course, another test was carried out at the beginning of September," she had said. "This must stop. We are not intimidated by the actions of the government of North Korea."