SEOUL, Oct. 9 (Yonhap) -- Increased activity has been detected at North Korea's rocket launch site with a concerted effort under way to conceal what is taking place, a U.S. website monitoring the North said, amid concerns the regime could undertake renewed provocations to mark a key anniversary this week.

It said photos showed crates next to the gantry tower on the launch pad and several large vehicles in front of the newly built fuel-oxidizer bunker. It said covers placed over many sites made it impossible to observe if a space launch vehicle or related components are located at the gantry tower or have been moved into the assembly structures.

The website then said images showed shelters erected next to the rocket test stand, indicating some sort of work may be underway.

"It may indicate preparations for a new engine test or continued work at the test stand in the aftermath of the September 20 engine test," it said.

Related to such activities, the North's main daily the Rodong Sinmun said Pyongyang is committed to pursuing efforts to expand its peaceful space program in a transparent manner.

The media outlet, an organ of the ruling Workers' Party of Korea, said the North will continue to strive to move forward on space exploration as befitting its status.

Local North Korean watchers said the renewed activities at the Sohae station may be an indication that the North is moving to launch another long-range rocket in violation of existing United Nations sanctions.

If a launch takes place it will follow the Sept. 9 detonation of the North's fifth nuclear device. 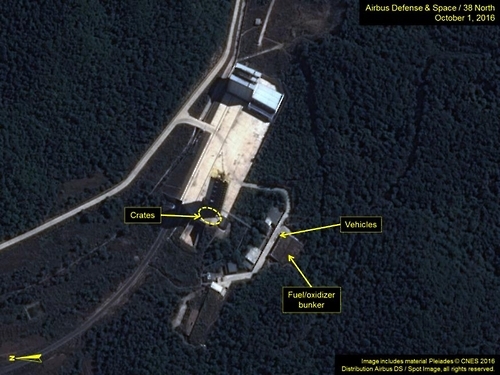