The military dispatched some 5,400 soldiers from the Army, Navy, Air Force and Marine Corps, and some 60 heavy machinery vehicles such as excavators to Ulsan, Pohang and the resort island of Jeju.

The troops mainly helped typhoon victims clean up their belongings, collect floating waste and remove earth and sand from the streets.

The previous day, the armed services sent some 4,200 troops to the areas hit by Typhoon Chaba that left at least seven people dead, according to the Ministry of Public Safety and Security.

Since the Ministry of National Defense and the Army's Second Operations Command set up disaster relief teams Thursday, the military has engaged in the restoration work.

Aside from human casualties, the typhoon damaged crops on some 7,500 hectares of farmland and inundated 508 houses along with another thousand vehicles. Almost 200 people from 90 households have been evacuated from their homes due to flooding. 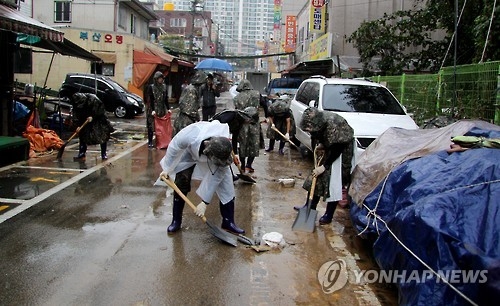