SEOUL, Oct. 9 (Yonhap) -- The United States is willing to use every possible means to pressure North Korea to give up its pursuit of weapons of mass destruction, a U.S. envoy to the United Nations said Sunday.

Samantha Power, Washington's ambassador to the U.N., made the remarks during a press conference held with a group of reporters in central Seoul, a day after arriving here for a four-day stay. She visited Japan before coming to South Korea on Saturday.

"While the Security Council resolutions are one tool in our toolbox and a very important instrument of pressure, we are committed to using all the tools in our tool kit to address this serious threat, including the diplomatic pressure that we are mobilizing around the world to convince other nations to isolate the regime," Power said.

"We understand that this is not only a threat to the U.S. and to the Republic of Korea but to the very foundation of our international order. We are determined to stand with you in addressing this threat. Our resolve is unwavering; our commitment is ironclad. We are by your side," she added.

Power's visit is regarded as unusual as it come as the UNSC is working on a fresh resolution to penalize the North for conducting a nuclear test last month. She explained that her visit is aimed at "directly consulting with our partners" on the North Korea nuclear stalemate.

"To be clear, I've traveled this region at this time to consult directly with our close partners in the ROK and Japan on how we can effectively change the calculus of the DPRK regime. A major part of that is shaping a new UNSC resolution that will seek to impose new sanctions and tighten enforcement of those sanctions that are already in place," the ambassador said.

"While I'm here meeting with senior officials in the government of the ROK, U.S. technical experts in New York are working in lock steps with their counterparts to find new ways to make it harder for the DPRK to obtain materials and the hard currency that they have used.. (for) their nuclear weapons program," she added. 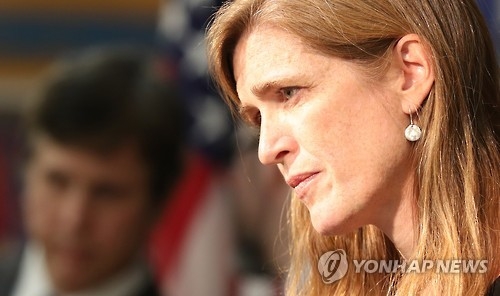 Power said that the latest resolution adopted in March following the North's fourth nuclear test contains "some exemptions" in the areas linked to the livelihood of the citizens in the country, some of which have been "exploited."

"The resolution contained some exemptions that were put in place because of our deep concern about the welfare of the citizens of the DPRK and some of the exemptions, it appears, have been exploited to not bring about the kind of enforcement and implementation that is necessary going forward," Power said. " We are hoping to address shortcomings we have seen."

As for the negotiations under way at the UNSC to draft a new resolution on the North in response to its fifth nuclear test on Sept. 9, Power cited as "the greatest challenge" the need to deal with the 14 other member countries and enlist unity and support.

"My greatest challenge in any negotiations in the UNSC is that there are 14 other countries on the UNSC. So we need to bring about a resolution that is tough, that makes material difference to DPRK's ability to gain access hard currency... and we need to secure a resolution that has support of other members including countries like China and the Russian Federation," the envoy said.

The ambassador also brought fresh attention to the dire human rights situation in North Korea, berating Pyongyang for being bent on developing its missile and nuclear weapons with no regard for its own people and, in particular, children starving and suffering from malnutrition.

"The way the DPRK threatens people beyond its borders with weapons of mass destruction and the way the regime terrorizes and uses its own people... it may seem unrelated. They are linked in a practical sense," she said. "This is a government that would rather grow weapons programs than its own children."

Meanwhile, Power earlier visited the truce village of Panmunjom on the inter-Korean border and a settlement support center for North Korean defectors, a move seen as efforts to highlight the solid alliance between Seoul and Washington and growing concerns over the abject human rights situation in the North.

She is to meet ranking government officials including Foreign Minister Yun Byung-se on Monday before leaving the country on Tuesday.

(3rd LD) Washington committed to using all tools to pressure N.K.: US envoy

(3rd LD) Washington committed to using all tools to pressure N.K.: US envoy