During his six-day trip to the Oceanian country, Chung engaged in what he called "parliamentary diplomacy," which led to the adoption of a joint statement that condemned North Korea's Sept. 9 nuclear test and urged it to uphold U.N. Security Council resolutions, which ban its nuclear and missile provocations. 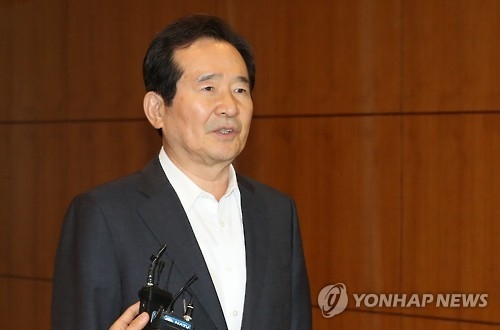 In the five-nation "MIKTA" gathering, named from the initials of Mexico, Indonesia, South Korea, Turkey and Australia, Chung and his four counterparts discussed an array of issues, including parliamentary independence from the government.

The two-day gathering in Hobart, Australia ended on Friday. MIKTA held its first gathering of its parliamentary chiefs in Seoul, South Korea, last year. Next year, it plans to hold the third gathering in Turkey.

Upon arrival at Incheon International Airport, Chung said that he would seek to ensure that the legislature will devise proper measures to support the victims of a recent typhoon and earthquakes, according to his aides.

In an interview with Yonhap News Agency before departing for Seoul, Chung pointed out that there is "room for improvement" in parliamentary diplomacy.

"It is important to ensure that our taxpayers' money is not wasted as we (parliamentarians) play a complementary role in supporting the government's diplomatic activities," he said.

"To this end, lawmakers should enhance their own independent (diplomatic) capabilities and their attitude (towards diplomacy) is also crucial," he added.

Commenting on the Seoul government's handling of foreign affairs, he said that South Korea's diplomacy has been "excessively" reliant on the U.S., its key security ally. He also said that diplomacy is for overcoming geopolitical difficulties, bolstering a country's voice on the international stage and ensuring national interests.