In his Facebook post, Moon also pointed out that the agreement between Seoul and Washington to deploy a Terminal High-Altitude Area Defense (THAAD) system to the peninsula by end-2017 needs parliamentary approval.

But he added it would not be easy to reverse the agreement with the United States, South Korea's top security ally, to station a THAAD battery in a golf course in the southern county of Seongju, about 290 kilometers southeast of Seoul. 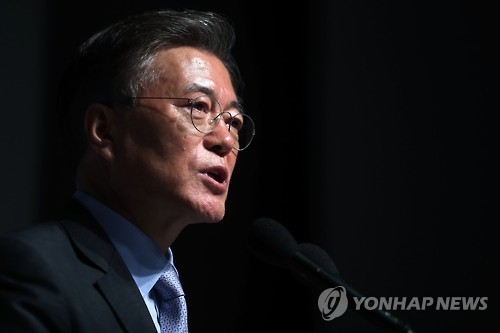 Moon, then, said that South Korea has already shown to the world a "strong resolve" against Pyongyang's nuclear and missile programs through the deployment decision, and that a delay would not cause any big change in the allies' efforts to install the THAAD in Seongju.

"The fundamental resolution of North Korea's nuclear problem is through the realization of (the goal to) denuclearize the Korean Peninsula," he said. "A freeze on the North's nukes is urgent, and then we should go in a direction towards a complement dismantlement of the North's nuclear arms."

He, in addition, pointed to the need for strong international sanctions and diplomatic efforts to persuade Pyongyang and Beijing into engaging in denuclearization endeavors.

"Whether it is a four-way meeting or six-party talks, there should be discussions (for the North's denuclearization) regardless of the format," he said. "We should work to pressure the North into coming to the dialogue table and China into exerting more influence over the North."

Seoul and Washington are currently pushing to deploy a THAAD battery, a core element of the U.S.' global missile defense program, to counter Pyongyang's growing nuclear and missile threats.

The South Korean leader has called the deployment decision a "minimal, self-defense" measure, while China and Russia have strenuously opposed it, believing that it would undermine their strategic security interests.