SEOUL, Oct. 10 (Yonhap) -- The South Korean government and the ruling Saenuri Party held talks Monday to quickly provide aid and other necessary support to the typhoon-stricken areas in the southern part of the country.

"We will promptly roll out all necessary support to minimize the damage and inconvenience of the residents of the typhoon-stricken regions," Minister of Public Safety and Security Park In-yong said during the meeting.

Saenuri said the government must designate the regions as special disaster zones to speed up the restoration efforts.

Last week, Typhoon Chaba struck southern parts of South Korea, leaving at least seven people dead. Aside from the human losses, the heavy rains affected some 7,500 hectares of farmland and inundated 508 houses, along with more than a thousand automobiles. 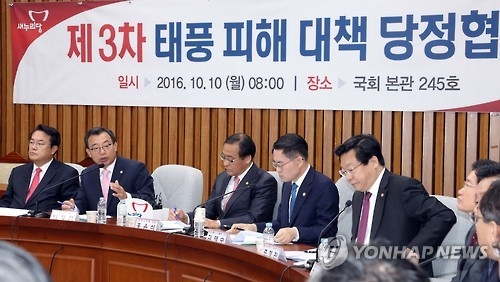