During her talks with the 18-member delegation of the Japanese Business Federation, also known as Keidanren, Park said that the two nations need to expand the scope of their business cooperation into new areas, such as games, cultural content, medicine and health care.

She also pointed to a recent drop in two-way trade, stressing the countries need to seek a "turnaround" by bolstering trade in consumer goods through various methods such as the electronic commerce system -- rather than focusing on business-to-business dealings. 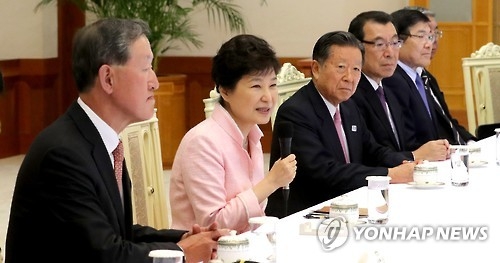 The Keidanren delegation, led by its Chairman Sadayuki Sakakibara, was in Seoul to attend a meeting with its South Korean counterpart.

Noting that exchanges among young people of the two countries are the "foundation of future bilateral economic cooperation," the president underscored the need for Japanese companies to continue to hold a job fair and provide internship opportunities for South Koreans under a 2015 arrangement.

Park and Japanese Prime Minister Shinzo Abe signed a memorandum of understanding over exchanges among young adults of the two neighbors on the occasion of their summit in October last year.

During the meeting, the South Korean leader positively evaluated the recent improvement in bilateral relations.

"It is meaningful to note that after the agreement last year to settle the comfort women issue, the bilateral relationship has been moving in a future-oriented manner, and beyond the bilateral cooperation, the two sides have strengthened cooperation in tackling global challenges such as a slowing economy, climate change and terrorism," she said.

The issue of the so-called comfort women, or victims of Japan's wartime sexual slavery, had been one of the biggest thorns in bilateral relations. But late last year, the two sides agreed to settle the matter under a deal that entails Tokyo's provision of financial assistance and apology for the atrocities committed.

At the meeting, Sakakibara asked Park to visit Japan later this year for a trilateral summit that also involves the leaders of Japan and China.

"I hope that President Park can make her first visit to Japan on the occasion of the trilateral summit slated to take place this year in Japan," Sakakibara was quoted by Park's aide as saying. He also invited her to a trilateral business summit that the business circles of the three nations have been preparing.

Seoul, Beijing and Tokyo have been discussing the issue of holding the trilateral summit. In November, the three nations held their summit in Seoul.

The president also used the meeting to urge the Japanese business leaders to expand their investment, while outlining Seoul's policy efforts to make South Korea an attractive investment destination, which include building regulation-free zones, cutting taxes and offering incentives for foreign investors.

The latest meeting follows the chief executive holding talks with some members of the Japanese business group in December 2014. At the time, she touched on ways to bolster two-way trade and mutual investment.

Founded in 1946, Keidanren is one of Japan's top three economic organizations. As of March 31, it consisted of 1,336 Japanese firms, 156 industrial associations and 32 regional economic groups.