SEJONG, Oct. 10 (Yonhap) -- About 85 percent of the Galaxy Note 7 smartphones sold in South Korea have been recalled after a little more than a month since Samsung Electronics Co. began the voluntary recall program, the state-run industrial standardization bureau said Monday.

A total of 389,000 units out of the 456,000 Galaxy Note 7s that had been manufactured between July 30 and Sept. 2 have been retrieved by the company, according to the Korean Agency for Technology and Standards (KATS).

"Still, some 70,000 units of the Galaxy Note 7 are being in use," KATS said in a release. "We demanded Samsung Electronics speed up the process of recalling the devices while we ask consumers to cooperate in returning the smartphones."

The tech giant stopped selling the Galaxy Note 7 that hit South Korean shelves on Aug. 19 and initiated the recall program in South Korea on Sept. 2 due to a battery problem.

KATS also ordered a recall of 456,000 units of the model on Sept. 22, while the Ministry of Land, Infrastructure and Transport banned all airline passengers from recharging the smartphone on board. 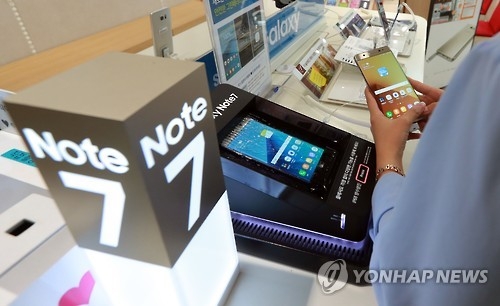 About 85 pct of old Galaxy Note 7s in Korea recalled

About 85 pct of old Galaxy Note 7s in Korea recalled