SEOUL, Oct. 10 (Yonhap) -- South Korea and the United States kicked off a large-scale joint naval drill in a show of force against provocations by North Korea, Seoul's military said Monday.

The U.S. sent the USS Ronald Reagan (CVN-76), one of its nuclear-powered aircraft carriers, to take part in the exercise that will run for six days starting Monday, the Navy said in a statement.

"The 'Invincible Spirit' exercise is aimed at showing the allied forces' strong commitment to counter relentless provocations by the North and improve their maritime interoperability," a Navy spokesman said.

In addition to the USS Ronald Reagan, the flagship of Carrier Strike Group 5 based out of Yokosuka, Japan, the allies' navies plan to mobilize dozens of warships and submarines for the drills. They include Ticonderoga-class Aegis missile cruisers, P-3 and P-8 maritime patrol aircraft, Apache helicopters and FA-18C Hornet fighter jets, the statement said.

In the East and West Seas, the allies will jointly carry out the maritime counter special operations force (MCSOF) to strike virtual North Korean special commandos attempting to infiltrate over the sea demarcation lines. In waters off the southwestern coast of the Korean Peninsula, the aircraft carrier strike group will conduct anti-submarine, anti-aircraft and precision-guided striking operations, it said. 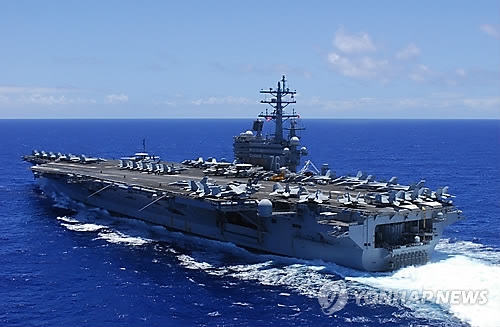 The drills come amid growing speculation that Pyongyang would engage in yet another provocation such as a nuclear test or a ballistic missile launch to mark the founding anniversary of its ruling Workers' Party on Monday.

Pyongyang has staged a series of missile tests this year in defiance of U.N. sanctions imposed after its fourth nuclear test in January. It followed this with a fifth nuclear detonation last month, despite warnings by the international community. The tests are seen as part of the North's program to develop a long-range nuclear missile capable of striking the U.S. mainland.