SEOUL, Oct. 10 (Yonhap) -- South Korea foiled multiple attempts to smuggle a total of 246 firearms into the country in the first eight months of the year, a lawmaker said Monday, citing data from the related authorities.

It already marks the highest number of guns confiscated by the Korea Customs Service (KCS) in a year in the 2010s, according to Rep. Yun Ho-jung of the main opposition Minjoo Party of Korea.

In South Korea, gun possession is outlawed except for soldiers, police officers and a small group of specially licensed people, although civilians are allowed to have air guns on a limited basis. 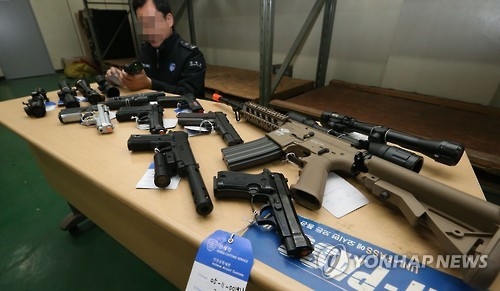 What's troublesome is an increasing number of attempts to bring in gun parts through intentional mail and other delivery services for assembly here.

"The number of gun smuggling attempts is on the rise amid the spread of military mania, influenced by (relevant mobile) games and broadcasting, with direct purchase (of products from foreign countries) growing popular," the lawmaker said.