SEOUL, Oct. 10 (Yonhap) -- South Korea will try to break a 42-year-old curse in Tehran when they face Iran in the upcoming World Cup qualifier this week.

The two nations will square off in their fourth match in the final Asian qualifying round for the 2018 FIFA World Cup at Azadi Stadium in Tehran on Tuesday. South Korea, looking for their ninth consecutive World Cup appearance, arrived in the Iranian capital on Friday (local time).

Both South Korea and Iran have seven points with two wins and a draw in Group A, where they are also competing against Uzbekistan, Syria, China and Qatar. However, Iran are ahead of South Korea on goal difference, plus-3 to plus-2, for the top spot in the group.

South Korea can become the group leaders with a victory in Tehran, but the numbers show Iran might be the favorites this time.

Iran are the only Group A nation ahead of South Korea in both FIFA rankings and the head-to-head record.

Iran are ranked 37th in the latest FIFA rankings, best among Asian Football Confederation members, while South Korea sit at No. 47. The Taeguk Warriors also have an inferior head-to-head record against Iran with nine wins, seven draws and 12 losses.

In particular, South Korea have never won on Iranian soil, dating back to 1974. They've collected only two draws and four losses in their previous six trips to Tehran.

South Korea head coach Uli Stielike has already suffered a defeat in Tehran. Two years ago, Stielike's side fell 1-0 to Iran in a friendly match after conceding a goal in the 82nd minute. Ten players who experienced the 2014 loss have traveled to Tehran again, seeking revenge with a historic win. 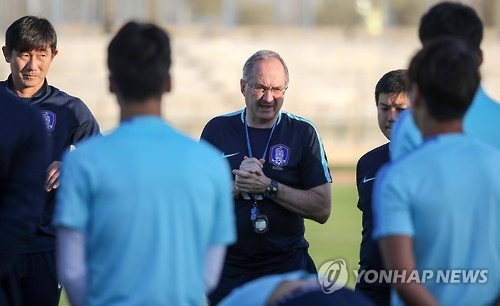 Stielike said things will be different this time, although the intimidating fan atmosphere at Azadi Stadium still could be a concern. The venue, located some 1,200 meters above sea level, can accommodate more than 80,000 fans.

South Korea will first try to break their scoreless run in Tehran. The last time a South Korean scored at Azadi Stadium was in 2009, when former Manchester United man Park Ji-sung struck an equalizer in a 1-1 draw.

South Koreans have only netted three goals in Iran. In addition to Park, Lee Young-moo had scored twice in 1977.

Stielike's charge will be counting on red-hot Son Heung-min to lead their attack. The Tottenham Hotspur forward scored the winner in South Korea's 3-2 victory over Qatar last Thursday, maintaining his club form also on the international stage.

Captain Ki Sung-yueng, who had one goal and one assist against Qatar, will orchestrate the midfield. Along with Crystal Palace's Lee Chung-yong, the Swansea City anchorman has played three times at Azadi Stadium, the most on the current roster.

Defense, however, could be a concern for the visitors.

South Korea were forced to make a change in their defensive line after center back Hong Jeong-ho was suspended for being sent off against Qatar.

Stielike selected Kim Min-hyeok to fill the void, but veteran Kwak Tae-hwi is likely to start. The 35-year-old partnered with Jang Hyun-soo in central defense in Tehran two years ago.

Stielike, however, could go with the center-back pairing of Kwak and Kim Kee-hee, and let Jang play as right back, just as he did against Qatar after Hong was ejected. 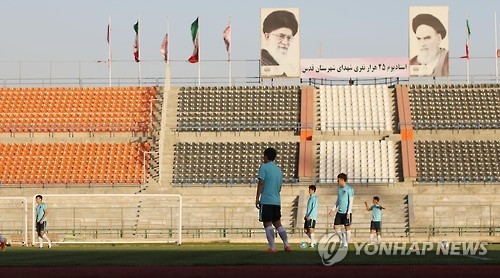 Iran, bidding to qualify for their fifth World Cup, are coming off a 1-0 victory over Uzbekistan in Tashkent on Thursday.

Led by Carlos Queiroz, former assistant to Alex Ferguson at Manchester United, Iran have not lost since their 3-1 defeat to Sweden in March 2015.

On their 23-man squad, 12 of them played against South Korea in the 2014 friendly, including Sardar Azmoun, who scored the winning goal. They also have formidable attackers, such as Reza Ghoochannejhad, Karim Ansarifard and Masoud Shojaei.

Queiroz's side will also be boosted by the return of wingers Ashkan Dejagah and Alireza Jahanbakhsh from injuries. Captain Andranik Teymourian, who has been facing South Korea since 2006, will cover the midfield.

Team Melli are the only nation in the final round that has not surrendered a goal so far. Veteran Jala Hosseini, the most capped player on either squad with 106 matches, leads their defense.

What could distract Iran, however, is the country's religious festival.

Their World Cup qualifier falls on the evening of Tasua and one day before Ashura, the two major holy days on the Shia Islam calendar to mourn the death of Imam Hussein, the Prophet Muhammad's grandson.

Some Iranian clerics insisted that the players and fans need to avoid celebration of goals during the match. They even claimed that it is better for Iran to forfeit the match than to harm the sanctity of the religion.