SEOUL, Oct. 10 (Yonhap) -- Hyundai Motor Co., South Korea's leading automaker, said Monday its electric vehicle (EV) appeals most to "early adopters" in their 30s, who are eager to try a new product or technology before others.

Sales of the Ioniq Electric in South Korea surpassed the 1,000-unit mark in early September, two months after its debut in the domestic market. It marked the fastest period among local EVs to reach the milestone.

Announcing the results of a survey on 748 individual customers nationwide, Hyundai Motor said 61 percent of its Ioniq buyers reside on the country's southernmost resort island of Jeju, which is pushing to turn all vehicles on the road into EVs by 2030.

Under the so-called carbon-free island project, Jeju has been ramping up its efforts to build necessary infrastructure and encourage people to opt for green cars through incentives.

By age group, those in their 30s account for the largest portion of 34 percent, with the number exceeding 40 percent if people in their 20s are included. 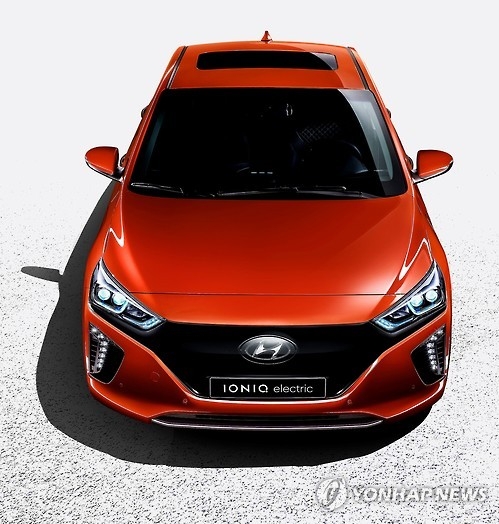 The percentage is much higher than the number for other Hyundai cars. As of August, people in their 20s and 30s accounted for 25 percent of the buyers of Hyundai's nonelectric vehicles.

"The numbers vividly show the characteristic of early adopters who have no fear of trying new things and want to have new experiences first," a Hyundai Motor official said.

Hyundai Motor also said nearly 51 percent of the Ioniq purchasers currently own other Hyundai vehicles, compared with the repurchase rate of 35-40 percent for all its models.

The Ioniq Electric is said to be capable of traveling up to 191 kilometers on a single charge, which is better than the 100 km range of other EVs on sale in South Korea. Hyundai Motor began the sale of the Ioniq line in late June, which also includes plug-in hybrid and traditional hybrid models.

The automaker aims to sell at least 4,800 Ioniq Electrics in the country this year alone and wants to take up more than 60 percent of the country's total electric car sales estimated to reach around 8,000 units for all of 2016.
(END)