SEOUL, Oct. 10 (Yonhap) -- The amount of payments made electronically hit a record quarterly high in the second quarter, central bank data showed Monday, in the latest sign that a growing number of South Koreans are using electronic means for financial transactions.

The daily average amount of electronic financial transactions came to 322 billion won (US$289 million) in the April-June period, up 7 percent from the previous quarter, according to the data from the Bank of Korea (BOK). 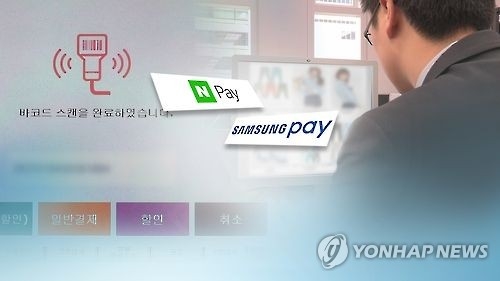 The Q2 reading marks a slight decline from an 8.6 percent on-quarter spike tallied in the first quarter of 2016, but the amount is the highest since 2008, when the central bank collected data on electronic payments.

Electronic financial transactions include all Internet and mobile-based payments, as well as purchases made with electronic credit and debit cards.

They include escrow and payment gateway service providers, as well as online financial institutions that are strictly dedicated to online or mobile payment services.