"The choreography version is a surprise present to the fans that have continuously supported and loved the boy group," Woollim Entertainment said Sunday.

Fans have high expectations for this video clip because it unveils the full choreography of what is arguably the group's best dance of all time.

The choreography video has aroused greater interest among fans because it includes the core moves of the song not shown in the official music video, which is known to resemble the eye of a storm.

The seven-member act topped various domestic and international charts soon after the release of their highly anticipated sixth EP "INFINITE ONLY" on Sept. 19.

Along with high album sales, the group ranked first on several music streaming sites with their title track "The Eye."

"INFINITE ONLY" is composed of seven songs, including the title track "The Eye" as well as "Eternity," "AIR," "One Day," "True Love," "Thank You" and "Zero." 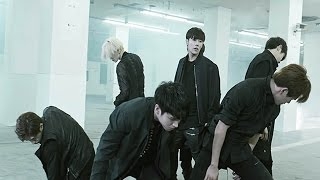 INFINITE unveils the choreography version of its title track 'The Eye'

INFINITE unveils the choreography version of its title track 'The Eye'