SEOUL, Oct. 10 (Yonhap) -- Samsung Electronics Co. has temporarily suspended production of the Galaxy Note 7 smartphone, an official at a supplier for Samsung said Monday, amid a series of media reports that some Note 7 replacements have caught fire.

The halt is in cooperation with consumer safety regulators from South Korea, the United States and China, the official said on the condition of anonymity.

"This measure includes a Samsung plant in Vietnam that is responsible for global shipments (of the Galaxy Note 7)," the official said.

Samsung started selling the Note 7 in South Korea on Aug. 19 but announced a global recall of 2.5 million units earlier last month following reports of some of the devices catching fire while being charged.

Samsung has encouraged owners of the Note 7 to swap their devices with new ones, but media reports said some new Note 7s in the U.S. and Taiwan have also caught fire. 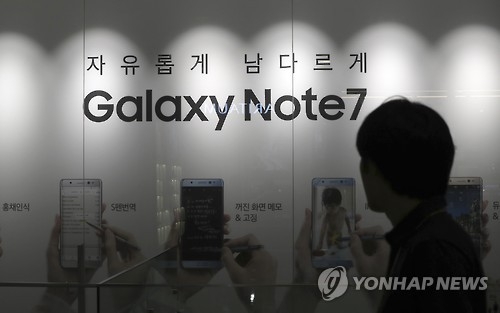 There have been eight cases of reported fires involving replacement Note 7s so far -- five in the U.S., one in South Korea and one in Taiwan.

Two U.S. mobile carriers -- AT&T and T-Mobile US -- have reportedly halted sales of replacement Note 7s due to safety concerns.

No results of the investigations into the seven cases outside South Korea have yet been announced.

A probe into one incident in Korea, conducted by Korea Testing Laboratory and SGS Korea, concluded that the fire was caused by a "strong external shock or being squashed."

Samsung has not immediately commented on the temporary suspension of the production of the Note 7s, but it is likely to affect the resumption of sales of the devices in Europe and India which is set for Oct. 28.
(END)