SEOUL, Oct. 10 (Yonhap) -- The presidential office Cheong Wa Dae on Monday put the brakes on the talk of constitutional revision resurfacing within the ruling Saenuri Party, saying, "Now is not the time" for it.

Kim Jae-won, senior presidential secretary for political affairs, made the remarks as party leaders have raised the need for full-fledged discussions on amending it, which President Park Geun-hye has opposed on concerns that it would trigger intense political wrangling amid a series of security and economic challenges.

"Our firm position is that now is not the time for discussing constitutional revision," Kim told Yonhap News Agency over the phone.

"We are considering delivering our stance to the Saenuri Party that it would not be good to raise the issue of rewriting the Constitution for the time being."

Saddled with escalating nuclear and missile threats from a provocative North Korea and the country's slower-than-expected economic growth, the chief executive has remained reluctant over any open discussion of the basic law.

But National Assembly Speaker Chung Sye-kyun and opposition lawmakers have been constantly raising calls for altering the Constitution, arguing that the current one does not reflect social and political changes that have transpired since its last amendment in 1987.

Adding fuel to the calls, Saenuri leader Lee Jung-hyun signaled his desire for discussions on the constitutional change last month on the premise that the debate will adequately reflect public opinion rather than being dominated by particular political forces.

Saenuri floor leader Chung Jin-suk has also expressed his willingness to consider setting up a special panel on constitutional revision after the ongoing parliamentary audit ends later this month.

The debate over the revision centers on making power -- now concentrated in the president -- more balanced and diffused -- a point over which many politicians from the ruling and opposition parties alike have largely concurred.

Yet, they have differed over how to rewrite the Constitution to alter the overall power structure, with public opinion diverging on this crucial issue as well. 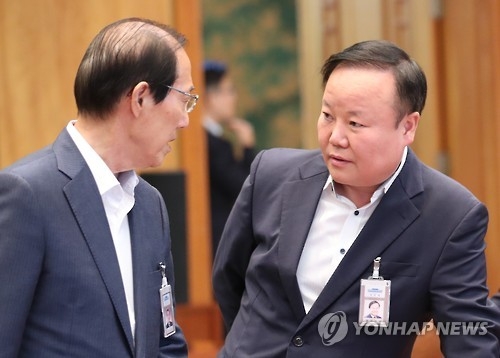