SEOUL, Oct. 10 (Yonhap) -- North Korea on Monday stressed the one-man rule by its leader Kim Jong-un and called for the people's allegiance as it marked the founding of its ruling party, Pyongyang's state media showed.

In a commentary, the Rodong Sinmun, North Korea's main newspaper, voiced the need to further show loyalty to Kim and follow his orders on the occasion of the 71st anniversary of the Workers' Party of Korea's (WPK) foundation.

Last year, North Korea held a massive parade to show off its military prowess, but this year Pyongyang is marking the key day without a big celebration or specific reports of Kim's activities.

Seoul's unification ministry said that there is no sign of North Korea holding any major event.

North Korea usually holds a military parade or central reporting session when it marks an anniversary with an ordinal number divisible by five. 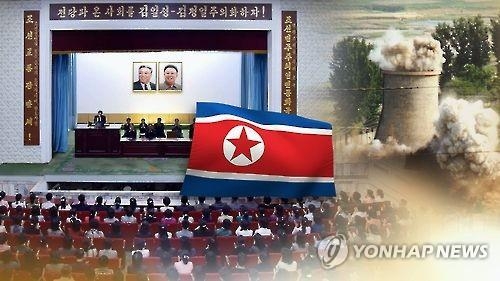 North Korea remained silent on Monday amid speculation that it may conduct another nuclear test or launch a missile to mark its anniversary following its fifth nuclear test in September.

Pyongyang vowed Saturday to venture into space and hinted at another satellite launch, which the international community views as a covert test of a long-range missile. In February, it sent what it claimed to be a satellite into orbit in the wake of its fourth nuclear test in January.

The United Nations is working on a fresh sanctions resolution to punish Pyongyang for the latest nuclear provocation.

"The government is closely watching the situation (to brace for North Korea's possible provocations) and Seoul is maintaining a full readiness posture," Jeong Joon-hee, spokesman at the ministry, told a regular press briefing.

The North's leader was elected as the ruling party's chairman at the WPK's congress held in May, a move aimed at helping cement his one-man rule.

At the party gathering, Kim made it clear that he will "permanently" defend the pursuit of developing nuclear weapons in tandem with boosting the country's moribund economy, commonly known as the "byeongjin" policy.

The Korean Central News Agency reported Monday that to mark the anniversary, senior party, state and military officials visited the Kumsusan Palace of the Sun where the embalmed bodies of the current leader's father, Kim Jong-il, and grandfather Kim Il-sung lie in state.

The report did not mentioned the name of the North's leader among visitors to the mausoleum.

Among the visitors were the country's ceremonial leader Kim Yong-nam and three vice chairmen of the State Affairs Commission including Hwang Pyong-so, the North's chief military official on political affairs.