ROME, Oct. 10 (Yonhap) -- An Italian professor who has worked decades with the Korean language and culture was recognized by the South Korean government this week for her contributions to promoting Korea in her native country.

Vincenza D'Urso, a Korean language professor at the Universita Ca'Foscari in Venice, was awarded a cultural merit medal on Sunday to coincide with Hangeul Day, which celebrates the Korean alphabet, hangeul.

Before boarding the plane to Seoul, she told Yonhap News Agency in a recent interview that she was thrilled to be receiving such a big honor from the country she considers her second home.

"When I first heard that I would be receiving the award, all the moments from when I first started studying Korean to my years studying in Korea and the nights I stayed up translating Korean literature went through my mind like a flash," D'Urso said in fluent Korean. "In a way, I feel a heavy burden on my shoulders because this award is encouragement that I should work harder to spread the Korean language, literature and culture in Italy." 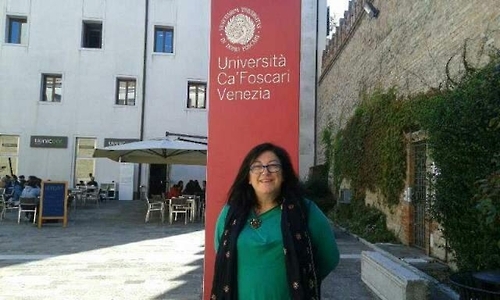 D'Urso has taught Korean and Korean culture to more than 2,500 students in her 18 years at the university, not to mention the numerous literary works she has translated from Korean to Italian, including those by renowned authors Hwang Sok-yong and Gong Ji-young.

In 2012, she took the helm of the first King Sejong Institute in Italy. The institute serves as a Korean language center in many parts of the world, and in Italy, D'Urso has also used it as a venue for classes in Korean calligraphy and the traditional Korean instrument gayageum.

The professor, now 58, recalled her first introduction to Korean.

"I enrolled at a medical school according to my father's wish, but discovered that I couldn't look at blood," she said. "I took a Chinese language class by chance and found it interesting. I switched departments and chose Chinese as my major and Korean as my minor, but Korean was so much fun. That was when Korean became my destiny."

A unique language that can't be found anywhere else in the world, hangeul embodies a deep philosophical meaning while being relatively easy to learn because of its scientific basis, she said. The global spread of Korean pop culture, a phenomenon known as "hallyu," has also played a part in Italian students.

"When I first studied Korean there were lots of difficulties because it was still the early stages of Korean language studies," she said. "But now, Italian students learning Korean can learn a variety of areas such as literature, linguistics, Korean history. There's been a huge development in the last 30 years."

Once she returns home, D'Urso said she plans to continue doing her job of teaching Korean to students and translating Korean literary works.

"I think of it as my duty to become a strong bridge connecting South Korea and Italy," she said.

If there's one bridge between her and Korea, there's her surname D'Urso, which derives from the word for "bear."

"Koreans and I have something in common in that we're both descendants of bears," she said. "Perhaps I was able to persistently spread the Korean language and culture because I, too, have persistence and perseverance in my blood."

According to Korean legend, the country was founded more than 4,000 years ago by the son of a bear, who was transformed into a woman after eating nothing but mugwort and garlic inside a cave for 100 days.
(END)