SEOUL, Oct. 10 (Yonhap) – Pre-emptive strikes against North Korea's nuclear and missile facilities are an option if there are signs of an imminent nuclear strike by Pyongyang, South Korea's military said Monday.

Defense Ministry spokesman Moon Sang-gyun made the remarks during a press briefing when he was asked about how Seoul planned to cope with the North's evolving nuclear and missile treats, as well as growing calls for such a move in the United States.

The official's remarks are not new since South Korea has said it will consider all available options to safeguard the lives of its citizens, which could include hitting the North first at a sign of serious trouble. 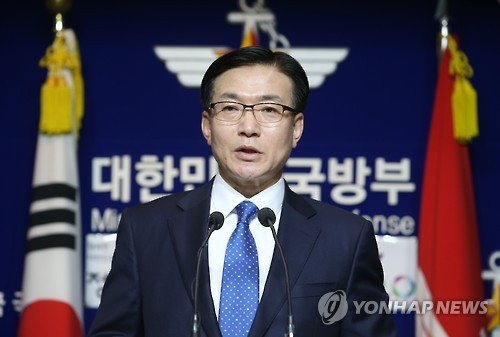 Reflecting this stance, an official at Seoul's Joint Chiefs of Staff (JCS) said the military is on high alert as North Korea might stage another provocation around the founding anniversary of its ruling Workers' Party.

The JCS official said the North appears to be fully ready to conduct its sixth nuclear test at any time, and it seems to be a "matter of a decision" by the communist regime leader Kim Jong-un.

A Navy official said the ongoing joint naval exercise by South Korean and the U.S. navies is to ramp up the allies' maritime interoperability in case of a military provocation by the North.

The U.S. sent the USS Ronald Reagan (CVN-76), one of its nuclear-powered aircraft carriers, to take part in the "Invincible Spirit" drill that will run for six days starting Monday in waters off the Korean Peninsula, the Navy said.

It said the naval drill will send a clear message that the allies will respond firmly to any provocations coming from the North.