SEOUL/INCHEON, Oct. 10 (Yonhap) -- Chinese boats illegally fishing in South Korean waters have been a source of diplomatic strain between the two countries over the past few years as they have become increasingly violent and hard to control.

Despite Beijing's efforts to get its fishermen to stop the illegal activities and follow relevant laws, Chinese boats have continued to poach in other countries' waters as fish stocks at home have become depleted. The inability of Chinese authorities to effectively regulate illegal fishing has exacerbated the situation, experts say.

On Friday, a 4.5-ton Coast Guard speedboat was sunk during an operation to capture illegal Chinese fishing boats in the Yellow Sea after a 100-ton Chinese boat intentionally rear-ended it.

As the speedboat sank, the Coast Guard officer who was on board jumped into the water and was later rescued by another Coast Guard boat. No one was hurt, but it showed the blatant disregard for the law that Chinese fishermen exhibit when operating in South Korea's exclusive economic zone (EEZ).

Sources said during the incident Chinese fishermen fiercely resisted authorities by barricading themselves in the steering house and not stopping the ship.

During this clash dozens of other Chinese boats joined the fray, causing the situation to intensify. The Coast Guard said its officers had to fire off their weapons to ward off the attack.

According to the Coast Guard, some 40 Chinese boats were illegally fishing in the zone at the time of the sinking. 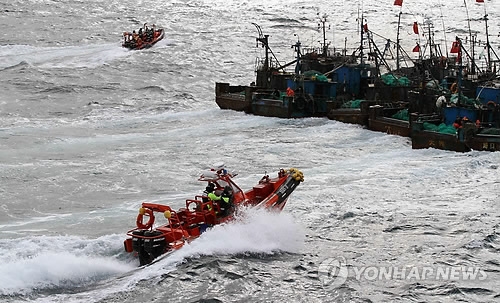 Holding a press conference Sunday, the Coast Guard slammed the Chinese fishing vessels, saying that deliberately crashing into a Coast Guard boat was a move tantamount to "attempted murder."

It said the latest incident was the first of its kind for a Coast Guard boat to be sunk due to an "attack" by a Chinese vessel, though it has been quite a while since Chinese boats became more violent and organized while trespassing in South Korea's EEZ.

Many of them have placed iron bars around the hull or brandish deadly weapons to prevent local law enforcement authorities from approaching, according to the Coast Guard.

In December 2011, Coast Guard officer Lee Cheong-ho was fatally stabbed by a Chinese sailor during a raid on a fishing vessel operating illegally in waters off Incheon. The Chinese captain who stabbed Lee to death later said during a court hearing that he committed the crime under the influence of methamphetamines.

In October 2014, another Chinese captain was shot to death while resisting arrest by swinging a saw around.

Recently, a number of Chinese boats have been operating in groups to share information on crackdowns. They have also been tying several boats together with rope so that they can quickly move from one boat to another if Coast Guard officials board, authorities said.

A total of 44 Chinese boats have been seized by the Coast Guard in Incheon alone this year, while 67 fishermen have been put under detention.

The Coast Guard said it will take all necessary measures, including the use of arms, to prevent similar cases from recurring.

The country's political parties also urged the government to take stronger actions against the illegal boats.

The ruling Saenuri Party said it will consider building a new Coast Guard office to oversee the five front-line islands in the West Sea to ensure the safety of local fishing boats.

Woo Sang-ho, the floor leader of the main opposition Minjoo Party of Korea, said the violent acts committed by Chinese boats have gone far beyond what is tolerable, adding the military and Coast Guard should launch a joint operation to counter them.

On Sunday, the government called in China's senior envoy in Seoul to lodge a formal complaint over the latest collision.

Whenever the issue of illegal fishing by Chinese boats was raised, the Chinese government has said it will "strengthen the education" of its fishermen.

"It basically means that South Korea has not been stern enough in reacting to the illegal activities," said professor Ryu Kwon-hong at Wonkwang University in Iksan, some 250 kilometers south of Seoul.

"Still, I do not think the military should actively get involved in this dispute. Who we are dealing with are civilians, after all," he said. "Giving more support and authority to our Coast Guard should be the first step." 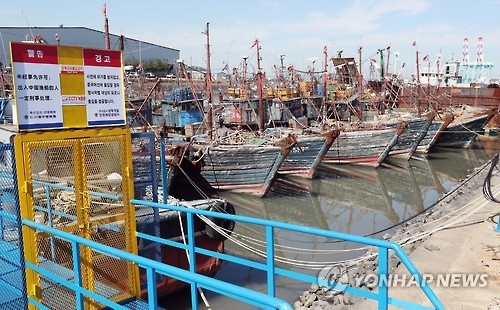