SEOUL, Oct. 10 (Yonhap) -- State prosecutors said Monday they have launched a probe into South Korea's top automaker, Hyundai Motor Co., over allegations it failed to take due procedures regarding defective airbags in some of its vehicles.

The announcement came less than a week after the country's Transport Minister Kang Ho-in filed a complaint with the Seoul Central District Prosecutors' Office against the company chief Lee Won-hee over alleged violations of the Automobile Management Act.

The minister said the automaker is suspected of not taking the necessary measures even after being aware of the possibility of airbag defects in 2,360 Santa Fe sports utility vehicles that were manufactured in June 2015.

After learning about the potential defects, Hyundai Motor took steps to address the problem in most of the vehicles before selling them, but failed to promptly carry out procedures for 66 units that were already sold by then, according to the ministry.

Under local law, automakers are required to inform car owners when they find any defects in a vehicle and notify the public through newspapers or other means. If they cover up any problems in the vehicles or fail to address them immediately, those responsible can be jailed for up to 10 years or pay a maximum of 100 million won (US$90,000) in fines.

Hyundai Motor belatedly notified the ministry that it internally corrected the defects and said the necessary reports were not made due to administrative mistakes.

The prosecution said it will summon Hyundai Motor officials to find out whether it contacted individual customers, without notifying the government, to cover up the defects. 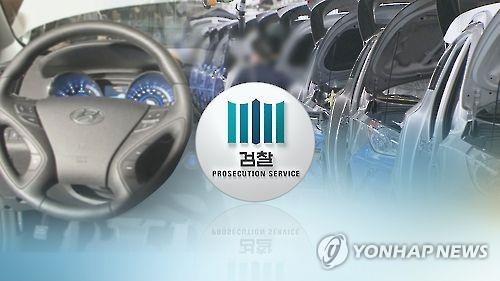