SEOUL, Oct. 10 (Yonhap) -- Hours before they hosted the South Korean baseball wild card game in Seoul Monday, members of the LG Twins were trying to put on a brave face.

The Twins are scheduled to face the Kia Tigers at Jamsil Stadium in the wild card contest in the Korea Baseball Organization (KBO). The Twins, the fourth seed during the regular season, only need a tie to advance to the next round of the postseason. The Tigers, who finished fifth, will need to win two straight games at Jamsil to do the same.

The format clearly favors the Twins, which explains why the mood in the club house was relaxing, at least according to their two starting pitchers.

"It's looking like normal," said right-hander Henry Sosa. "This is just a game. Win or lose, you never know. You just have to have fun, and you can't do anything more than that." 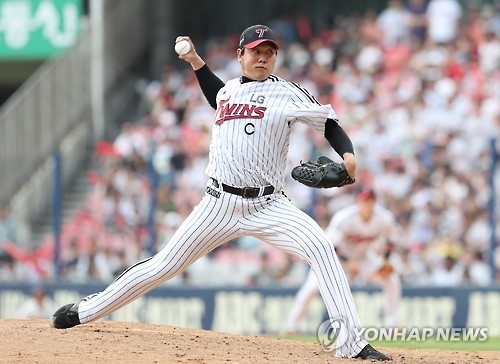 Ryu Jae-kuk, who's scheduled to start Game 2 Tuesday if necessary, said he liked how his teammates seemed extra motivated for the occasion.

"I like how some of the guys are really pumped up and ready to play," the Twins' captain said. "There are people in that room wanting to show people what they're capable of, and I think that's what makes us a strong ball club. I don't think many of us are really that nervous."

Ryu's second-half surge was a major reason for the Twins' advance to the postseason. The one-time major leaguer went just 5-8 with a 5.11 ERA in the first half, but was 8-3 with a 3.36 ERA after the All-Star break. It included Ryu's first career complete game shutout on Sept. 18.

Ryu guarded against overexcitment, however, saying the players have to stay within themselves.

"I think if you try to do too much, it often leads to silly mistakes," he said. "So that's one thing I am worried about. But again, we have a lot of players who want to prove themselves, and that's a great advantage in the postseason."