SEOUL, Oct. 10, 2016 (Yonhap) -- Poets from South Korea and France got together in Seoul to translate French poems into Korean, the organizer for the joint project said Monday.

The Literature Translation Institute of Korea (LTI Korea) said it joined forced with the International Poem Center of Marseille and launched the "Co-translation Atelier for Korean and French Poets" endeavor. The work will be carried out from Monday through Friday.

The event, the second of its kind, is part of the celebration to mark the 130th anniversary of establishing diplomatic ties between the two countries. Under the program, six poets, three from each country, meet to translate poems into each other's language, with the help of professional translators.

On May 9-13, the same event took place in Marseille, France. At that time, the French poets did a rough translation of 14 Korean poems into French, followed by group discussions to edit and finalize the translation. On the last day, they read out the translated Korean poems in front of a French audience.

The process is an efficient way to minimize erroneous translations and better convey the rhythm and rhyme of an original piece of work, the LTI Korea said.

On Friday, the poets will have a reading at Wit n Cynical, a poetry bookstore in Sinchon, Seoul, at 7:30 p.m. The event is free and runs for an hour and a half. 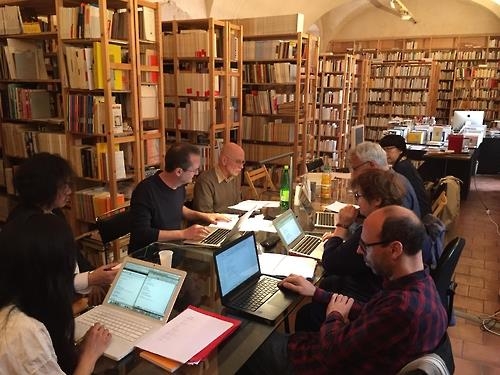