Asked for a comment on the incident in which a Chinese fishing boat intentionally rammed and sank a Coast Guard vessel, Foreign Ministry spokesman Geng Shuang told a regular press briefing that "South Korea should deal with the incident in a cool-headed and sensible manner in terms of bilateral relations and regional stability."

Shuang's comments appear to reflect China's position that the incident should in no way worsen its relations with South Korea.

On Friday, in an operation to capture fishing boats operating illegally, a 4.5-ton speedboat of the South Korean Coast Guard was sunk in waters 76 kilometers southwest of Socheong Island off Incheon, west of Seoul, after being rear-ended by a Chinese ship. There were no injuries or casualties from the incident. An officer was on board when the ship capsized and was later rescued by another Coast Guard boat in the area after jumping to safety.

South Korea on Sunday called in China's consul general in Seoul to lodge a formal complaint over the incident. Seoul's foreign ministry said that the Chinese diplomat had expressed regret over the incident and Beijing's position to further strengthen a crackdown on illegal fishing activities. The ministry urged the Chinese side to make "active efforts" to prevent recurrences. 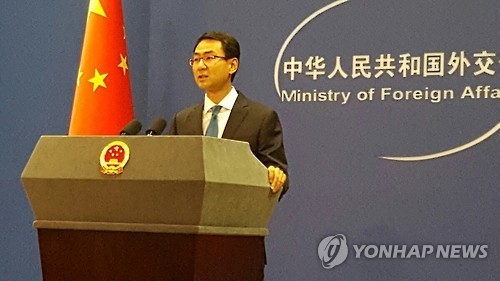