SEOSAN, South Korea, Oct. 12 (Yonhap) -- Closed off inside the walls of a stone fortress, the annual festival that has come to represent this western coastal city of Seosan could be heard before it could be seen.

People walked in through the arched gateways as if they were lured by the perpetual beat of drums and piercing sounds of music played by costumed artists. One by one, they formed small groups in the vast open space of the grass, taking shelter under trees, pavilions and the clear blue sky above.

The Seosan Haemieupseong Festival, named after the city and castle located some 150 kilometers south of Seoul, held its 15th edition last weekend under the theme of "Time Travel through 600 Years: The Pan of Joseon Era Begins."

"Pan" in Korean refers to a game board, and this year's festival was specially organized around various traditional games and folk play, including puppet shows and reenactments of royal processions from the Joseon Dynasty (1392-1910). 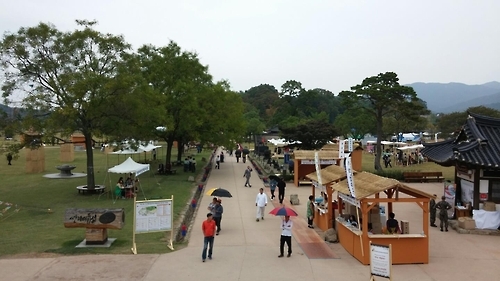 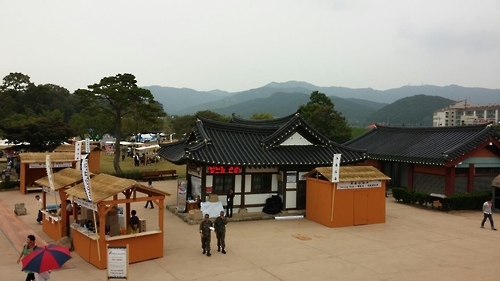 "This place has a 600-year history, and this festival provides a great opportunity for people to travel back in time to the Joseon era and experience the lives of our ancestors through hands-on activities," Seosan Mayor Lee Wan-seob said in an interview with Yonhap News Agency on the fortress's grounds.

The mayor, dressed in blue traditional Korean "hanbok" attire, pointed to the centuries-old weapons on display and the people eating rice balls made on the spot.

"More than any other festival, this region and castle can help people connect the past, present and future," he said.

A highlight of the opening day on Friday was a reenactment of a royal parade and military drill watched by King Taejong. The king, after visiting the area in 1416, decided that Haemi could serve as an effective defense post against Japanese invasion and ordered the relocation of Chungcheong Province's military command. 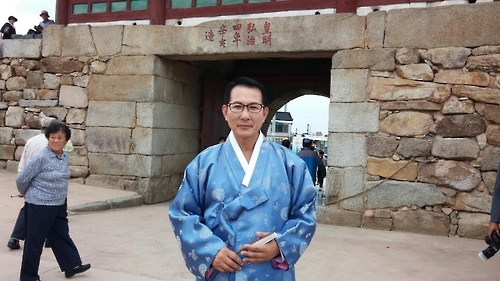 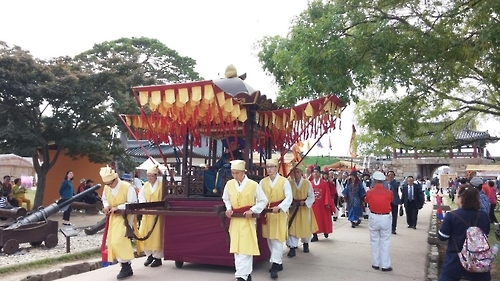 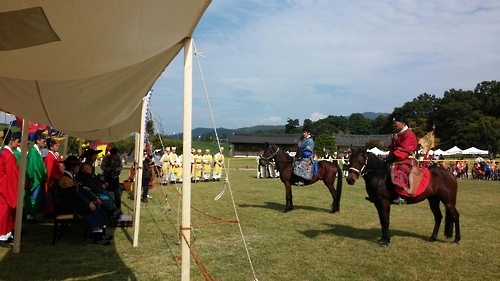 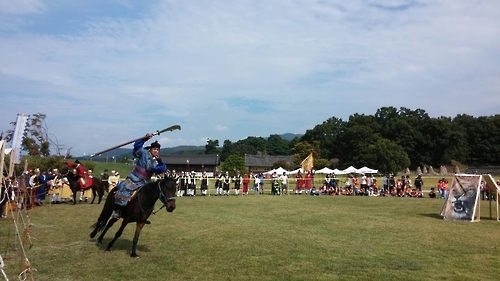 As the royal procession walked through the castle grounds, eager tourists lined the path to take photos, while young children on excursions sat patiently at one end to watch the start of the military drill.

The Joseon-era exercises, called "gangmu," served two purposes: to train the king's men and to hunt game. The wild boar and deer that were killed in the exercises were offered up in ancestral rites and distributed to the people.

Once the reenactment began, costumed men on horseback raced around a ring, shooting arrows at images of animals. Cheers went up from the crowd as the king and his son -- or the actors playing their parts -- watched with an air of satisfaction.

Fans of Korean historical dramas were sure to enjoy the scene as the actors also spoke in the language of the times.

"It's very interesting here. There's a lot to see," said Jaisi Kalpana from Nepal, who was participating in the festival as a market vendor. The 32-year-old said it was her third year coming to the festival to sell jams and wines made from berries produced at her farm. A mother of two, Kalpana has been working on strawberry farms in South Korea for more than four years. 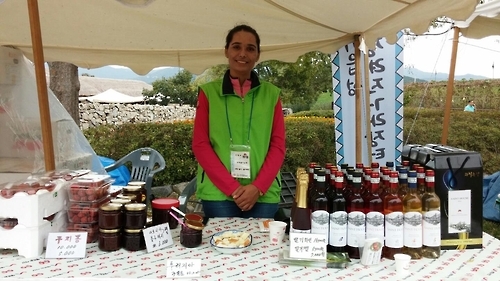 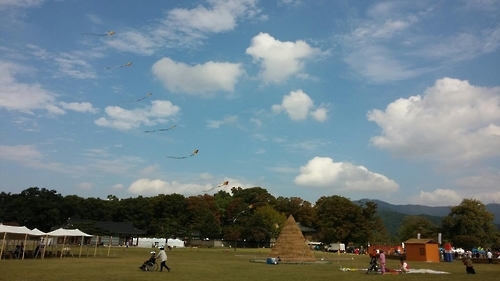 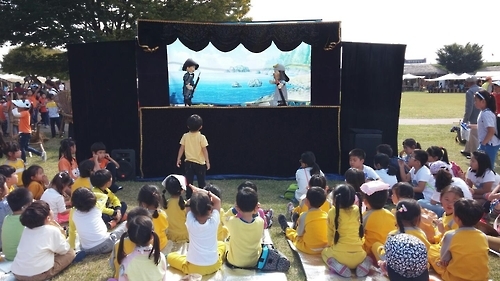 On a patch of grass near the market, a puppet show entertained young children in uniform. While some sat still with their eyes glued to the puppets, others went up close to touch the dolls or watch the show from backstage.

The story, as was fitting for the castle, was that of Admiral Yi Sun-shin and his courageous naval battles against invading Japanese forces. Yi spent 10 months as an officer at Haemieupseong Fortress in 1579 before he moved farther south to defeat the Japanese. A wooden statue of Yi stands on the castle grounds.

Zach Morgan, an American teacher of English at nearby Hanseo University, said he has been a regular visitor to such festivals.

"I like to look and see. I like the costumes and sometimes the food, but we haven't had any food yet, so maybe later," he said after watching a competition of "jegi," a traditional game that involves tossing up a type of shuttlecock with the foot.

No festival is complete without food, and Haemieupseong was no exception.

From Korean pancakes and ox head soup to "makgeolli (rice wine)" and "yeot (taffy)", the vast array of foods on offer was a tantalizing sight. Tourists chatted over bottles of makgeolli or sipped on traditional tea, some sitting on wooden benches and others inside thatched huts.

From a table on one side of the eating area, vendors sold ring-shaped garlic bread that Pope Francis tasted during his visit to the fortress in August 2014. Aside from being a logistical and cultural hub during the earlier kingdoms, Seosan was also a site of persecution of Roman Catholics in the 19th century. Nearly 1,000 believers were martyred on the castle grounds in 1866. 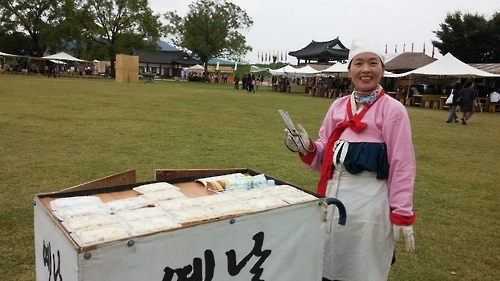 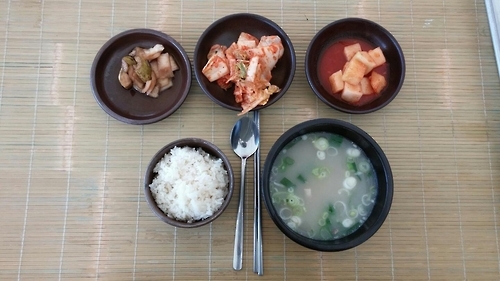 Set Yata, a 26-year-old Cambodian who was visiting the event with her Korean mother-in-law and two sons, said it was her first time seeing such sights in her three years in the country.

"It's very different," she said, referring to how Korea looks now and how it apparently looked hundreds of years ago.

With Haemieupseong being one of the best preserved fortresses in the country, the festival was recognized by the culture ministry as the most promising festival for four years in a row from 2013 through 2016.

The mayor, however, expressed frustration that the event has not drawn as many foreign tourists as he would like.

"It's a great way to promote Korea to the world, so I'm thinking about sending publicity materials to embassies and targeting our publicity marketing at foreigners so that more of them can come," he said. "It has appeal to foreigners, so I think that not only Seosan but the central government and culture ministry should also take more interest in the festival and better inform foreigners about it."

The festival wrapped up Sunday after a three-day run. 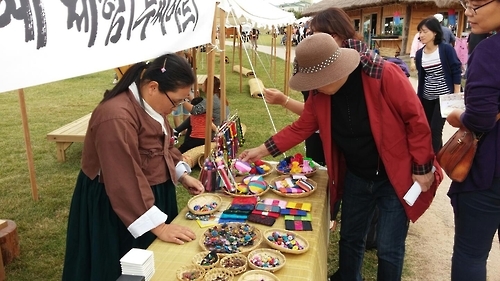 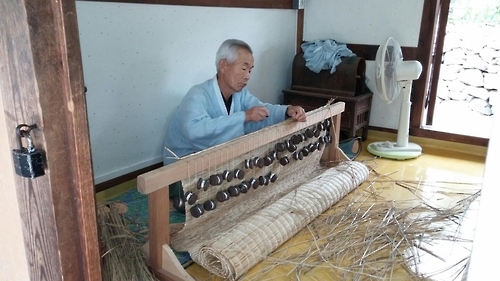