TEHRAN, Oct. 10 (Yonhap) -- South Korea football coach Uli Stielike said Monday they are in Tehran to write a new history, emphasizing that the players should enter the pitch with a victory on their minds in the upcoming World qualifier against Iran.

South Korea will face Iran in their fourth match in the final Asian qualifying round for the 2018 FIFA World Cup. The match will start at Azadi Stadium at 6:15 p.m. in Tehran or 11:45 p.m. in Seoul on Tuesday.

South Korea have never won in the Iranian capital, posting only two draws and four losses. The Taeguk Warriors also lost to Iran 1-0 in each of the last three meetings. However, Stielike said it's time to turn the tables.

"We've lost only twice since 2015 and we've been playing good football so far," Stielike said at the press conference at Olympic Hotel in Tehran. "Although we have never won in Iran, we're here to make new history."

Both South Korea and Iran have seven points with two wins and a draw in Group A, where they are also competing against Uzbekistan, Syria, China and Qatar. South Korea currently are second in the group, trailing Iran on goal difference, but the victory will lift them past Iran as the group leaders.

"Both teams know the importance of this match," Stielike said. "We're here to play football and we will show fair play with respect."

Stielike's side suffered a 1-0 defeat in Tehran two years ago in a friendly match. Overall, South Korea have an inferior head-to-head record against Iran, with nine wins, seven draws and 12 losses.

"Two years ago, there weren't many crowds, but tomorrow we are likely to see a packed stadium," he said. "Also, Iran were playing defensive football back then, but I don't expect the same thing tomorrow."

The German coach said they will not settle for a draw.

"All the players should enter the game with a mindset of collecting a victory," he said. "How to play the game on the pitch is another matter, but they must play with a victory on their minds."

Stielike said he believes South Korean players will handle the pressure of playing in front of zealous Iranian fans, but he urged referees to overcome the atmosphere at Azadi Stadium.

"We have many players who are competing in the top-level leagues," he said. "Referees should overcome the pressure and let the two teams play their best matches." 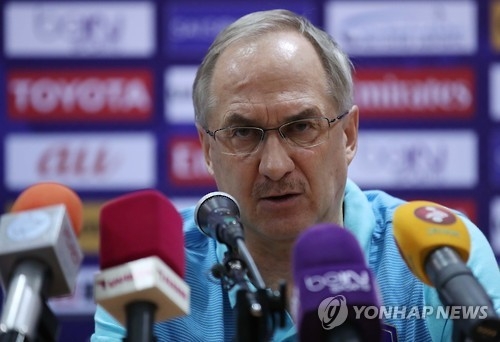