The Tigers capitalized on an early error at Jamsil Stadium in Seoul, and starter Hector Noesi tossed seven effective innings to set up the second wild card game between the two in the Korea Baseball Organization (KBO) Tuesday.

The Twins, by virtue of finishing one spot ahead of the Tigers in fourth place, will get a second crack at a spot in the next round. A tie on Monday would have sufficed.

The Tigers, as the lower seed, now have to win again Tuesday to advance to the next stage.

The Tigers didn't get their first hit off LG starter David Huff until the fourth inning, and they capitalized on their first opportunity -- with a little help from their opposing shortstop. 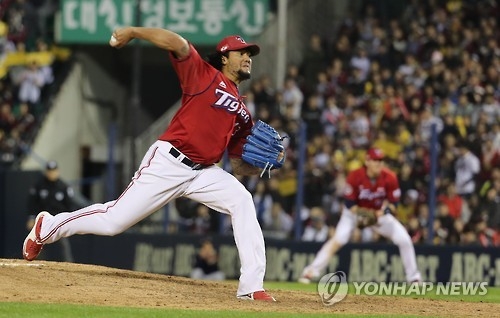 Brett Pill led off with a single, and one out later, Na Ji-wan looped a double to right field. With two outs, An Chi-hong hit a grounder right at shortstop Oh Ji-hwan, who mishandled the ball and let it bounce into shallow center, allowing both runners to score.

The Twins tried to answer back in the bottom fourth, as Park Yong-taik led off with a single. Luis Jimenez flied out to right, and Chae Eun-seong grounded into an inning-ending double play.

The wasted opportunity haunted the Twins in the sixth, as the Tigers added to their lead.

Pill led off the sixth with a double, and Kim Joo-chan moved him to third with a grounder to first. Na Ji-wan then hit a sacrifice fly to center for a 3-0 lead.

Kim Joo-chan's two-out single in the eighth made it 4-0 Tigers.

The Twins refused to go down without a fight and cut the deficit in half in the eighth.

Oh Ji-hwan led off with a double, and pinch hitter Lee Byung-kyu reached on an error by Kia shortstop Kim Sun-bin. Yoo Kang-nam then lined a single to right, as Oh scored easily and Lee moved to third. 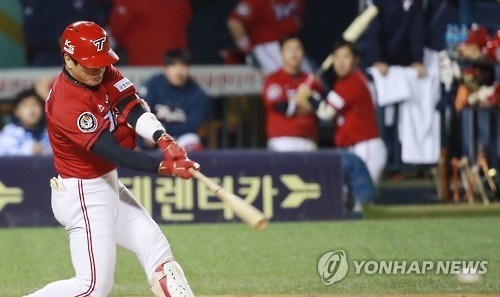 The hit chased Noesi from the game. And with men at the corners, Ko Hyo-jun, Kia's second pitcher, bounced one in front of the plate for a wild pitch that brought in the Twins' second run.

On the same play, though, Yoo was thrown out at third for the inning's first out and the Twins failed to add more runs.

The Twins tried to mount another ally in the bottom ninth, as Park Yong-taik led off with an infield single. But cleanup Luis Jimenez, who led the club with 26 home runs and 102 RBIs, hit into a 1-4-3 double play.

Chae Eun-seong then grounded out to third for the game's final out.

The Twins didn't manage much off Noesi, who was only 1-2 with a 4.15 ERA against them in the regular season.

The Dominican right-hander retired 11 straight batters at one point and didn't allow an extra-base hit until Oh Ji-hwan's double in the eighth.

He gave up two runs -- one unearned -- on five hits and a walk in seven-plus innings. He struck out three, and 70 of his 98 pitches went for a strike.

Huff, who'd won two regular season starts against the Twins, allowed four runs -- two unearned -- in seven innings of work. He struck out seven and walked none in the losing cause.