SEOUL, Oct. 10 (Yonhap) -- The start of postseason baseball in the nation's capital offered a tale of two shortstops: one making spectacular plays and the other botching routine grounders to cost his club the game.

The Kia Tigers defeated LG Twins 4-2 in the Korea Baseball Organization (KBO) wild card game at Jamsil Stadium in Seoul. In the quirky wild card format here, the Tigers, who finished one spot behind the Twins in fifth place in the regular season, must win another game at Jamsil Tuesday to reach the next round.

And the Tigers got plenty of help from LG shortstop Oh Ji-hwan on Monday to live to see another day of baseball.

The Tigers didn't get a hit off LG starter David Huff -- 2-0 with a 1.26 ERA against the Tigers in the regular season - until the fourth inning. They finally touched him for a single and a double, and with two on and one out, An Chi-hong hit a seemingly harmless grounder right at Oh.

Oh seemed tentative as the ball took a funny hop before it got to him, and let it hit his glove and bounce into shallow center. Both runners came home for a 2-0 lead. 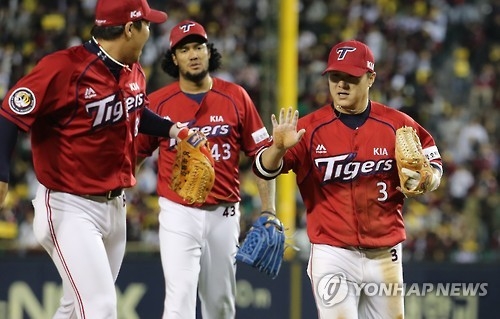 Oh had an inauspicious start to the game, as he committed his first error of the game in the first inning on another ordinary grounder. It came with two outs and nobody on, and Huff bailed him out by striking out the next batter to end the inning.

Oh committed 17 errors during the regular season, fourth most in the league. He put together his best offensive season with 20 homers, 78 RBIs and a .280/.387/.494 line, but has generally been regarded as a below-average fielder.

And that shaky glove raised its ugly head at the most inopportune time for the Twins.

In a stark contrast to Oh's adventures, his Kia counterpart, Kim Sun-bin, made a pair of diving grabs to start inning-ending double plays, both worthy of a highlight reel.

In the second inning, Kim dove to his left to snare a grounder off the bat of Yoo Kang-nam and flipped to second baseman An Chi-hong to start the twin killing.

And Kim made almost a carbon copy of that play in the bottom fourth. The Twins were trying to scratch a run after giving up a pair in the top half of that inning. Park Yong-taik led off with a single, and one out later, Chae Eun-seong hit one up the middle, only to see Kim start another rally-killing double play.

Kim did commit one error himself, though, dropping a pop fly while backpedaling into shallow left in the eighth. The play eventually led to a run, but the Tigers hung on to win the game and make the error moot.

Kim said afterward he breathed a sigh of relief after the Tigers escaped the eighth without further damage.

"I would have been a huge scapegoat," he said. "I don't even remember the two early plays. I just feel terrible about the error."

(LEAD) Tale of two shortstops: one spectacular, other subpar in postseason game

(LEAD) Tale of two shortstops: one spectacular, other subpar in postseason game