Noesi tossed seven solid innings as his Kia Tigers defeated the LG Twins 4-2 in the Korea Baseball Organization's wild card game at Jamsil Stadium in Seoul. He only gave up one earned run while striking out three and was named the Player of the Game by the league. Seventy of his 98 pitches went for strikes.

The KBO's wild card game format is different -- if not downright bizarre -- compared to the one in the majors. The Tigers, who finished a spot below the Twins in the regular season, will have to win another game Tuesday, back at Jamsil, to advance to the next round.

And Noesi is a major reason the Tigers were able to extend their series by one day.

He was seen as a questionable choice to start the win-or-go-home game, because he had only gone 1-2 with a 4.15 ERA versus the Twins during the regular season. That one win, though, did come at Jamsil Stadium on June 1, when he threw seven shutout innings.

Manager Kim Ki-tai wanted to see a repeat of that particular performance, and he got something quite close to it.

Noesi looked a bit shaky in the opening frame and needed 31 pitches to work around a walk and a single.

Then he quickly settled down and retired 11 straight batters in one stretch. The only extra-base hit off Noesi was Oh Ji-hwan's double to open the eighth inning. 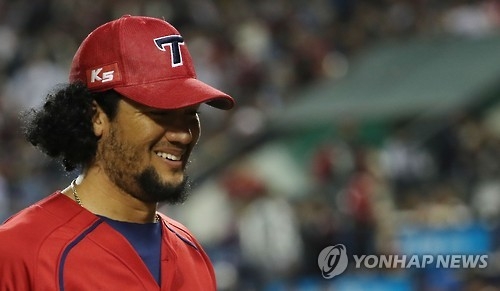 The Twins rallied with two runs in that frame with Noesi out of the game and had a tying run at the plate in the ninth before the Tigers' bullpen slammed the door shut.

After the game, Noesi said the importance of the occasion wasn't lost on him.

"I set my mind just to do my best because if we lost, we would have gone home," he said. "I was a bit cold early on in the game. But from the second inning, I was trying to keep all my pitches down and get people out."

Noesi spent five seasons in the majors with four different clubs. His claim to fame was once being traded by the New York Yankees to the Seattle Mariners alongside the top prospect Jesus Montero. And in 2014, split with the Seattle Mariners, the Texas Rangers and the Chicago White Sox, Noesi led the American League with 28 home runs allowed in 172 1/3 innings.

It has been a much different tale in the KBO. In his first season here in 2016, Noesi led the KBO with 206 2/3 innings pitched and tied for third with 15 wins.

He also kept the ball in the park in the offense-happy league, giving up just seven home runs all year.

Noesi said he drew motivation from raucous Tigers fans on Monday and also credited his teammates with strong defensive efforts.

Shortstop Kim Sun-bin made two diving catches to start inning-ending double plays. Though he dropped a pop fly in the eighth that led to a run, Noesi said he still appreciated Kim's effort.

"Everything is not going to be perfect, and he made two really good plays," he said. "Everyone can make mistakes."