"We have considerably much in common: We're the type of people who won't easily make a compromise and don't make films that most viewers like to see," Hou said during the event of the 21st Busan International Film Festival (BIFF). 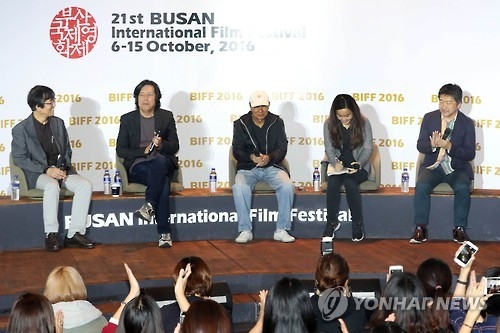 The 69-year-old veteran filmmaker admitted that he is never free from funding problems when he tries to make the sort of film that he wants to make.

He said one possible solution is that Asian filmmakers create a fund with money they earned from commercial films and get help from the fund when they shoot arthouse films. "It may be hard to materialize because of its scale, but may not if we can persuade investors."

Korean, Japanese and Taiwanese viewers can also help by opting to see Asian films in theaters, he added.

Koreeda said he doesn't like to use such a formal word like "solidarity" but feels that tie all the time.

"Personally speaking, I might not have become a movie director if I hadn't met Hou," the Japanese helmer said, adding that he has been greatly influenced by the two senior directors' works.

"The mere presence of the contemporary directors who make such great films itself makes me happy. And this is a big driving force in my movie-making." 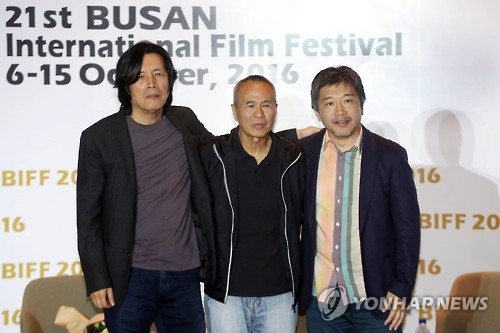 The directors also touched on the recent standoff between the Korean film industry and the BIFF's sponsoring city of Busan over the "municipal interference" in the festival's management.

Lee said it would be "worthless" to talk again on the issue because the Busan city government would never listen to film groups.

"I'd rather have something to tell those working for the film festival and local film industry people: I want them to keep their self-respect at this time."

Koreeda said: "I don't know all the details of the problems facing the Busan film festival. But it's totally up to the festival regarding what films it would screen. I think this is not a matter that outside authority can intervene and control."

Hou said Busan is the best suit for a film festival with beautiful ocean views and nice weather.

Losing this "precious" annual event would be a "big loss" to the city of Busan, he said.

The Japanese filmmaker said all members of BIFF might use the current crisis as a good chance to review what the film festival means to the city.

"This is a good chance for BIFF officials and us who attend this event to think about what the festival's 40th anniversary should be like," he said, adding that what has been built for the past 20 years would surely make the event's longevity possible. "I hope we will ponder about and make the next 20 years happen together."