WASHINGTON, Oct. 10 (Yonhap) -- The United States is working with South Korea to deploy the THAAD missile defense system as early as possible to defend the Asian ally and American troops there from North Korean missile threats, the White House said Monday.

The White House said in a posting at its "We the People" online petition website that Washington and Seoul decided to deploy a Terminal High Altitude Area Defense battery in the South because of "North Korea's continued provocations and refusal to engage in serious negotiations on denuclearization."

The posting was in response to a petition calling for scrapping the decision to deploy THAAD.

"It will not undermine China's or Russia's strategic deterrent. The United States is working with the ROK to deploy this system as soon as feasible in order to more safely defend our ROK Ally and U.S. military personnel deployed to the region from the North Korea nuclear and ballistic missile threat," it said. 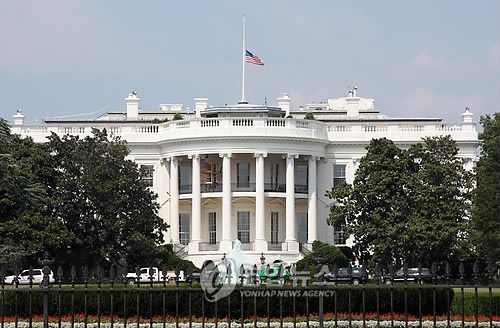 The White House also noted growing threats from the North.

"In addition to the nuclear tests North Korea conducted in January and September of this year, North Korea performed multiple ballistic missile tests that directly violated several U.N. Security Council Resolutions. These provocative actions highlight the grave threat these actions pose to the peace and security of the entire Asia-Pacific region," it said.

"Under President Obama, the United States and the Republic of Korea (ROK) have worked to strengthen our alliance, which helps ensure a peaceful, secure, and prosperous future on the peninsula and in the Asia-Pacific region. A key part of our alliance includes strong support from the United States in defense of the ROK when needed," it said.