SEOUL, Oct. 11 (Yonhap) -- Lucas Harrell enjoyed his one season in South Korea so much that he flew in from the United States to watch his former club, the LG Twins, play in its wild-card game in Seoul on Monday.

Harrell, who split the 2016 season with the Atlanta Braves and the Texas Rangers, is the rare pitcher who went from the majors to the Korea Baseball Organization (KBO) and back to the big leagues.

And to hear him tell it, the one KBO season in 2015 went a long way toward helping him returning to the majors.

"The KBO helped me get back to the big leagues," Harrell told Yonhap News Agency during Monday's game between the Twins and the Kia Tigers at Jamsil Stadium in Seoul. He said he'd arrived around 3 p.m. Monday, but with about 12 hours of sleep on his way here, he wasn't jetlagged at all. 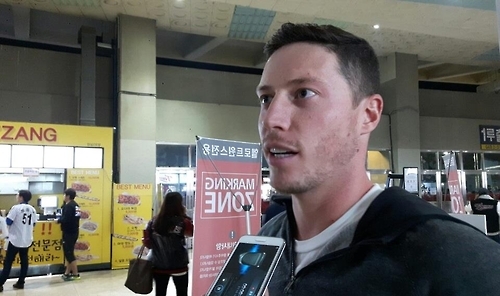 "Working with the pitching coach (Kang Sang-soo) here helped me out. He helped me get back (to the U.S.) and eventually back to the big leagues," Harrell added. "My experience here was awesome. I loved it here. I'd come back to Korea in a heartbeat."

Harrell spent parts of five seasons in the majors before joining the Twins in 2015. He went 10-11 with a 4.93 ERA in 33 appearances for the Twins last year, and the KBO club decided not to bring him back for a second season.

Instead, Harrell found his way back to the majors. He acquitted himself well with the Braves, going 2-2 in five starts with a 3.38 ERA across 29 1/3 innings. He was traded to the Rangers in July and went 1-0 with a 5.60 ERA in four starts in Arlington.

"I just appreciate being able to play baseball," Harrell said, when asked if being away from the majors before getting back there gave him a fresh perspective. "I missed being around the guys and the game."

Harrell said he would wait until after Monday's game to reunite with the Twins. Unfortunately for him, the Twins lost the game 4-2.

They'll get a second crack at a spot in the next round Tuesday. Harrell said he planned to stay in Seoul eight to 10 days, and that he hoped to catch a few more LG postseason games. 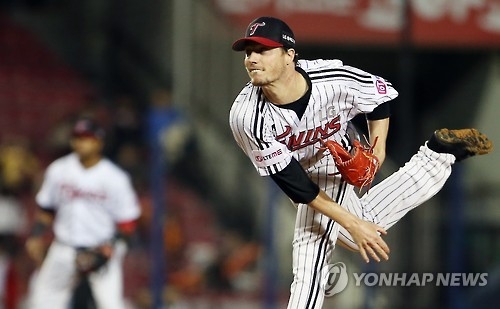