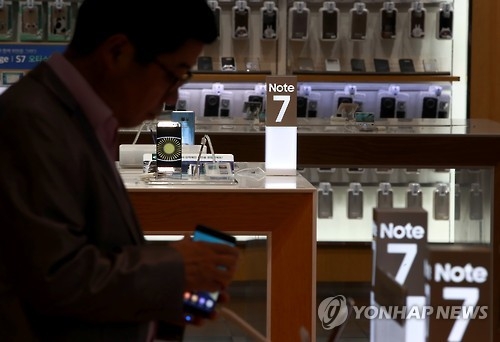 "We are working with relevant regulatory bodies to investigate the recently reported cases involving the Galaxy Note 7. Because consumers' safety remains our top priority, Samsung will ask all carriers and retail partners globally to stop sales and exchanges of the Galaxy Note 7 while the investigation is taking place," Samsung said in a statement.

In a separate statement, Elliot Kaye, chairman of the U.S. safety commission, said the decision by Samsung to stop sales and exchanges of the Note 7 was "the right move."

"No one should have to be concerned their phone will endanger them, their family or their property. Due to the ongoing safety concerns associated with Galaxy Note 7 phones, it is the right move for Samsung to suspend the sale and exchange of all Galaxy Note 7s," Kaye said.

"I also appreciate the safety leadership role the wireless carriers and retailers are playing by temporarily stopping the sale of the Note 7 and not providing the Note 7 model as a replacement device," Kaye said.

The Korean Agency for Technology and Standards, a state institution responsible for product safety, also advised consumers to stop using the Note 7s.

The exact reason of the reported fires involving the Note 7s is unknown.

But many analysts agreed that Samsung apparently rushed to launch the device to beat Apple's new iPhone, suggesting that quality tests about the Note 7 might have been insufficient.

"Samsung Electronics launched the Galaxy Note 7 after skipping over using the name Galaxy Note 6. That was meant to signal an improvement of the device's capabilities, but it looked somewhat hasty," Lee said.