SEOUL, Oct. 11 (Yonhap) -- South Korea's ruling Saenuri Party said Tuesday the country must consider stricter actions against Chinese boats accused of obstructing justice in Korean waters, adding options could include the use of force and firearms.

"(We urge the government) to implement an active crackdown on illegal and violent resistance from unregistered Chinese fishing boats, which interferes with the execution of law by local authorities," said Rep. Kim Gwang-lim, Saenuri's chief policymaker.

Kim added the government must prepare countermeasures to protect the livelihoods of local fishermen and to protect the country's exclusive economic zone (EEZ).

The remark came after a Coast Guard boat was sunk last week during a law enforcement operation by a Chinese boat illegally operating in the area.

The Coast Guard said one of its 4.5-ton speedboats was engaged in stopping a Chinese fishing vessel that was in South Korean waters without permission, when a 100-ton ship intentionally rear-ended it. The boat that rammed the Coast Guard boat was part of a larger flotilla of Chinese boats operating illegally in the EEZ.

The incident occurred around 3 p.m. Friday in waters 76 kilometers southwest of Socheong Island in Incheon, west of Seoul. No one was hurt in the incident with the officer on board the ill-fated boat being rescued by another Coast Guard vessel after jumping into the sea.

The lawmaker said other countries including Russia and Indonesia use firearms to deal with Chinese fishing boats encroaching on their waters, adding South Korea should also consider utilizing more force.

The policymaker then urged the Chinese government to take responsible steps in this matter, adding that resolution of the issue is important for better Seoul-Beijing relations. 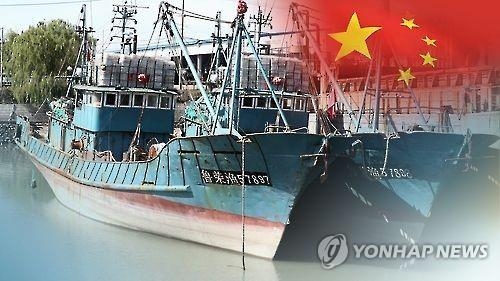