The shipyard started at 85,500 won on Jan. 4 but has almost doubled so far this year.

"Next year, demand for new ships is expected to rise and an industrywide recovery is likely to improve its corporate value," said Yoo Jae-hoon, an analyst at NH Investment & Securities. The analyst raised the 12-month target price to 180,000 won from 150,000 won.

Yoo said the shipbuilder's third-quarter operating income is estimated at 164 billion won, shy of market estimate, but its fourth-quarter earnings may improve.

Other analysts also raised their target prices for Hyundai Heavy citing better than expected earnings and an expected recovery in the global shipbuilding sector.

"In a short haul, demand for LNG carriers and oil tankers may rise, and next year, demand for new ships will continue," said Jeon Jae-chun, an analyst at Daishin Securities.

Early this month, Hyundai Heavy bagged a deal to build two oil tankers, whose terms of the deal were not disclosed.

In the first eight months of the year, Hyundai Heavy has clinched deals valued at $2.27 billion to build 18 ships, which represents a 75.7 percent drop from a year earlier.

Earlier, Hyundai Heavy mapped out 3.5 trillion won worth of self-rehabilitation measures, including asset sales and a cut in the workforce, in order to stay afloat amid a drop in new orders.

Under the shipbuilder's self-rescue plans, it will reduce its stock holdings, sell noncore assets and reduce its workforce, which will lower its debt-to-equity ratio below 100 percent by 2018.

The shipbuilder swung to the black in the first quarter for the first time in 10 quarters with an operating income of 325 billion won, aided by its stronger restructuring efforts. 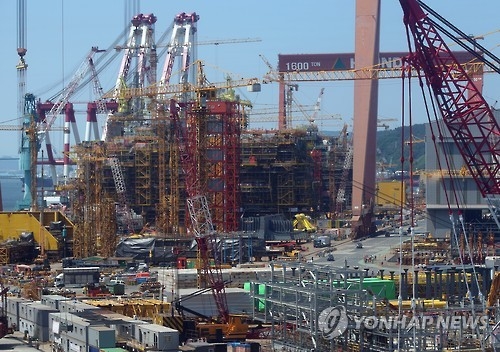