SEOUL, Oct. 11 (Yonhap) -- The elder brother of Lotte Group's chairman has sued the embattled businessman on suspicions of accounting irregularities related to a key unit, his aides said Tuesday, adding woes to the ongoing investigation into the retail giant. 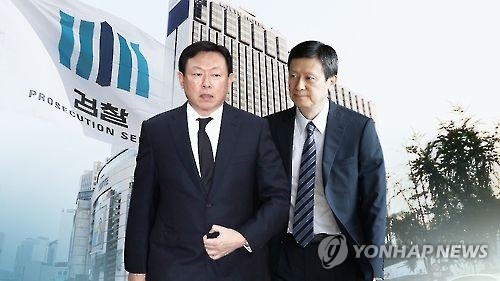 His latest legal action against his brother came only a day after a Seoul court turned down an arrest warrant on Dong-bin, who has been under probe on charges of embezzlement and other business irregularities.

Dong-joo, the first son of Lotte founder Shin Kyuk-ho, has waged an uphill battle against his younger brother since last July to gain control of South Korea's fifth-largest conglomerate via a series of lawsuits and board room coups, but his past attempts ended in failure.

The estranged brother has repeatedly claimed that Lotte Shopping tried to hide its losses from Chinese businesses, trying to persuade shareholders that Dong-bin was not fit for the top executive role.

In the complaint, Shin claimed Lotte Shopping omitted about 370 billion won (US$332.5 million) worth of losses on capital reduction in the company book from May 2013 to November 2015 in breach of accounting rules.

In a regulatory briefing in February, Lotte Shopping said it posted 346.1 billion won in net losses in 2015 in the process of reevaluating its operating rights in China, marking the first deficit since the firm was listed on the Seoul bourse in 2006.

Lotte Shopping said it marked the deficit because its operating rights on Chinese firms it took over were degraded considering the unclear business prospect in China over the next five years.

The prolonged succession feud between the founder's two sons is another headache for the family-run conglomerate as Korean prosecutors have been looking into Lotte's alleged wrongdoings since they launched full-fledged raids into the group's headquarters in June.

Since the launch of the investigation, prosecutors have called in a number of high-level executives at Lotte who are suspected of being involved in the massive corruption scheme.