The country's exports totaled US$9.47 billion from Oct. 1-10, down from $11.58 billion tallied over the same period last year, according to the Korea Customs Service (KCS).

Exports of semiconductors fell 5.9 percent on-year, and those of wireless devices plunged 31.2 percent over the 10-day period, while shipments of cars and auto parts dived 51.9 percent and 20.3 percent, respectively.

The on-going partial strikes at major automakers, including industry leader Hyundai Motor Co., and the worldwide recall of Samsung Electronics Co.'s Galaxy Note 7 played a role in the sharp drop in exports.

South Korea's exports rose 2.6 percent in August for the first time in 20 months, snapping the record-long losing streak that started in January 2015, but they relapsed into negative terrain in September to mark a 5.9 percent fall. 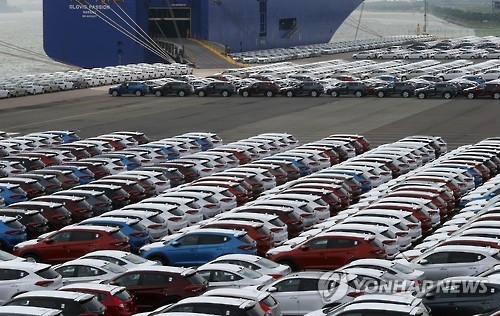