SUWON, South Korea, Oct. 11 (Yonhap) -- An annual cultural festival at Hwaseong Fortress, a UNESCO-designated cultural heritage site, bid its attendees farewell in the city of Suwon, south of Seoul, culminated by a full-scale reenactment of a filial monarch's pilgrimage to his father's tomb.

The 53rd Suwon Hwaseong Fortress Cultural Festival, which opened on Friday for a three-day run, was held in celebration of the 220th anniversary of the fortress' construction. King Jeongjo, the 22nd monarch of the Joseon Dynasty (1392-1910), had the fortress built.

Visitors to the festival were enthralled by a total of 26 programs including the reenactment of King Jeongjo's travels to his father’s shrine, the reenactment of a royal birthday party for his mother Crown Princess Hong, a martial arts demonstration called "Mumuhwapyeong" and a concert at the fortress' Banghwasuryujeong Pavilion.

About 15,000 people jampacked the venue near the fortress' Changryong Gate to take part in an event marking the festival's close around 6:30 p.m. on Sunday. Suwon Mayor Yeom Tae-young said in his address, "The festival was a great feast to show Suwon citizen's true potential and their joyfulness," vowing to present a better and more fruitful festival next year to visitors.

Yeom's declaration of the festival's close was followed by a performance reenacting the king's training of soldiers and a farmers' group play, known as "daedongnori," in which the visitors mingled together.

The highlight of the festival was the two-day reenactment of the king’s pilgrimage to the fortress starting from Saturday. Crown Prince Sado was deposed by his own father, King Yeongjo, and later confined to a rice chest, where he starved to death in 1762 at age 28. After ascending the throne in 1776, King Jeongjo traveled to the fortress 13 times for the purpose of paying tribute to his deceased father at Yunggeon Royal Tomb, where his father Sado is buried near Suwon.

His trips to the fortress were the largest royal processions during the dynasty. Leaving Changdeok Palace in Seoul, the procession stayed at Siheung Temporary Palace one night before reaching the fortress via the nearby town of Anyang and Jijidae Hill at the city's entrance.

In 1795, King Jeongjo embarked on an eight-day trip to Suwon Hwaseong to celebrate the 20th anniversary of his reign and the 60th birthday of his mother. During the trip, the king was accompanied by a 6,000-strong entourage.

This pilgrimage to the tomb, during which the king accompanied his mother with care, was one of many deeds that he did to show his filial affection toward his father.

Under the Suwon city government's plan, organizers reenacted the royal procession on a route that spans 47.6 kilometers from the Seoul palace to the fortress based on its original form.

Reenactments of the procession had previously taken place along the route in Gyeonggi Province and did not start in Seoul.

The Suwon city government teamed up with the Seoul metropolitan government to reenact the 1795 royal procession to the fortress, as described in a collection of documents called "Wonhaeng Eulmyo Jeongri Uigwe." Uigwe is a text that records and illustrates royal protocols used during the Joseon Dynasty. 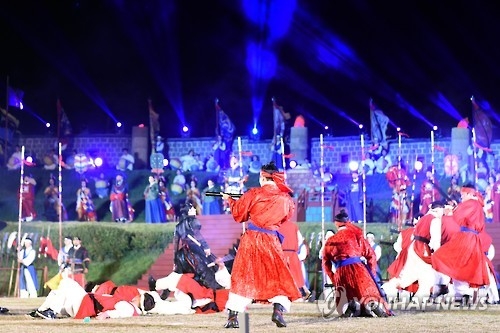 A takeaway from the event, Yeom said, is the linkage of Suwon Hwaseong Fortress and Changdeok Palace, both designated as a UNESCO cultural heritage site in 1997, through the reenactment of the king's pilgrimage. Yeom also thanked the municipal governments of the three other cities along the pilgrimage's route -- Seoul, Anyang and Euiwang -- for joining the festival.

This year's event had a stronger orientation toward the people than ever so that citizens were encouraged to participate, drawing an estimated 480,000 visitors during the three-day event, the organizers said.

The organizers also held a quiz game in which participants must solve riddles involving people who lived during the reign of King Jeongjo.