In the six-day joint naval maneuvers that will run through Saturday, the allies have applied the concept of "Korea Massive Punishment & Retaliation" (KMPR) to improve striking capabilities of ship-to-ground missiles on top of the usual anti-ship and anti-air exercises, a defense ministry official told Yonhap News Agency.

The KMPR operational concept is aimed at decimating parts of Pyongyang, and envisions launching pre-emptive bombing attacks on North Korean leader Kim Jong-un and the country's military leadership if signs of imminent use of nuclear weapons are detected, ministry officials said. 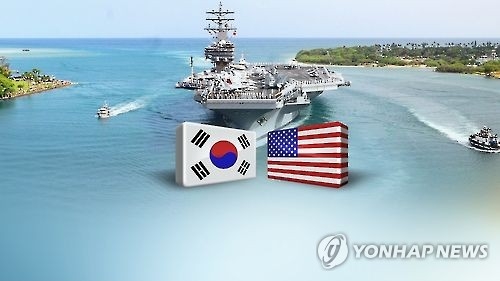 On Monday, the allies carried out the so-called precision-guided missile striking exercise by mobilizing ship-to-ground and submarine-to-ground cruise missiles which have an average flight range of up to 1,000 kilometers, the ministry said.

The U.S. sent the USS Ronald Reagan (CVN-76), the flagship of Carrier Strike Group 5 based out of Yokosuka, Japan, to take part in the exercise aimed at showing the allied forces' strong commitment to counter relentless provocations by the North and improve their maritime interoperability.

In the East and West Seas, the allies will jointly carry out the maritime counter special operations force (MCSOF) to strike virtual North Korean special commandos attempting to infiltrate the sea demarcation lines. In waters off the southwestern coast of the Korean Peninsula, the aircraft carrier strike group will conduct anti-submarine, anti-aircraft and precision-guided striking operations, the official said.

The drills come amid growing speculation that Pyongyang may engage in yet another provocation such as a nuclear test or a ballistic missile launch to achieve its stated goal of developing a long-range nuclear missile capable of striking the U.S. mainland.

Pyongyang has pushed forward a series of missile tests this year in defiance of U.N. sanctions imposed after its fourth nuclear test in January. It followed this with a fifth nuclear detonation last month, despite warnings by the international community.