During a Cabinet meeting, Park also stressed the need to help North Koreans get a better grasp of the link between the "astronomical" costs of Pyongyang's nuclear and missile programs, and their poverty -- a move to further pressure the North into renouncing its nuclear ambitions. 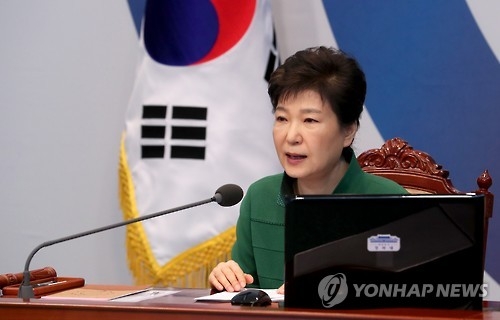 Rejecting growing calls for talks with the recalcitrant regime, the president reiterated that sticking to dialogue would be tantamount to jeopardizing the safety of South Koreans and allowing Pyongyang to stall for time.

"Thus, we now have to focus on the across-the-board efforts to compel North Korea to change tack and give up its provocations through sanctions and pressure, and we also have to stand united and ensure a robust security posture," she said.

Such remarks came days after Rep. Moon Jae-in, a former leader of the main opposition Minjoo Party of Korea and presidential aspirant, demanded the government resume diplomacy toward the unruly regime and temporarily suspend the ongoing efforts to deploy a U.S. anti-missile system to the peninsula.

"We don't have much time now," she said. "I call on political circles to put the foremost priority on the wellbeing of citizens and muster up our strength for (the betterment of) the Republic of Korea and its descendants."

"(We have to make the North Korean regime) clearly recognize that if it does not halt its nuclear development, its efforts to keep (even) the basic diplomatic relations (with the outside world) will be difficult as the current contours of the 'international community versus North Korea' will be solidified, not to mention stronger sanctions," she said.