INCHEON, Oct. 11 (Yonhap) -- With the only LPGA Tour event in South Korea just around the corner, golfers from the host nation said Tuesday they're determined to take the title before typically enthusiastic fans.

The LPGA KEB Hana Bank Championship will start Thursday as the third stop in the six-tournament Asian swing on the tour. It'll be played at Sky 72 Golf & Resort's Ocean Course, adjacent to Incheon International Airport, for the ninth straight year.

The event features 17 of the top-20 players, making it the strongest field of the Asian swing so far. World No. 1 Lydia Ko, from New Zealand, headlines the list, joined by the next two golfers on the rankings, Ariya Jutanugarn of Thailand and Chun In-gee of South Korea.

Lexi Thompson, world No. 5 from the United States, is the defending champion.

At a joint press conference at the course, Chun said she has some fond memories of the event. In 2014, she shot a four-over 76 in the first round to stay in the back of the pack, but climbed up the leader board over the next three days to end up in a sudden-death playoff.

Chun eventually lost to fellow Korean Baek Kyu-jung, but Chun said it was a career-altering experience. 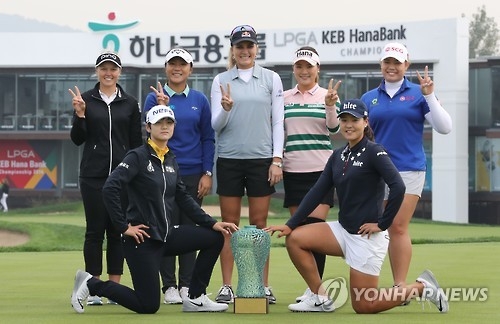 "This is the tournament that instilled a lot of confidence in me," she said. "And it forced me to start thinking longer and harder about how to approach the game of golf. I am excited to be playing alongside some great players this week."

Both of Chun's LPGA victories have come at majors. Most recently, she won the Evian Championship at 21-under, the lowest score in relation to par at any major championship. She has also clinched the Rookie of the Year title.

"I think by winning the Evian Championship, I proved that my victory at the U.S. Women's Open last year (as a non-member) wasn't a fluke," Chun added. "At a Korean tour event last week, I managed to identify some problems with my game, and I've been practicing to correct them for this week. Things have been going well so far."

Ryu So-yeon, a former top rookie and a three-time LPGA winner, said the LPGA KEB Hana Bank Championship is the tournament she'd most like to win every year, since it's the only LPGA stop in her native country.

"There's always pressure of competing before huge crowds at home, and this tournament feels different than other events," Ryu said. "I am trying to overcome that pressure and play well this week."

Ryu has been as consistent as they come, with eight top-10s this year and 10 top-10s a year ago. Her consistency, though, hasn't yielded a win since August 2014, something that also frustrates the player.

"Even though I haven't won since 2014, I feel like my ball-striking has improved a great deal," she said. "Putting has been the biggest problem for me, but I've been working hard on it, too. I feel like I am hitting the ball well enough to contend for the title here."

Also taking a crack at the trophy this week will be Park Sung-hyun, a Korean LPGA (KLPGA) Tour star with seven wins on home soil this year. She has played at occasional LPGA events, and has earned enough money in her limited opportunities to earn full-time LPGA privileges for next season.

Park played at her first LPGA event here last year, and finished second. After playing in seven consecutive events, Park took the last week off, and said she's all refreshed and ready to go.

"I finally took some time off and worked on a few things in my game," she said. "I did well here last year and I am looking forward to this week, too."

Park, 23, hasn't yet committed to the LPGA Tour next season. She said she's in the process of finalizing a deal with a management company, and will announce her future plans once she signs the contract.