INCHEON, Oct. 11 (Yonhap) -- At the tender age of 19, Lydia Ko has been putting together a Hall-of-Fame career on the LPGA Tour.

The world No. 1, however, said Tuesday she feels she still has room to grow.

"I feel like there are parts of the game that I can still improve, even though I am the No. 1 player in the world," Ko said at a press conference held prior to the LPGA KEB Hana Bank Championship at Sky 72 Golf & Resort's Ocean Course, next to Incheon International Airport. It's the only LPGA Tour event in South Korea each year.

"I've been working to get more consistent," added Ko, a Korean-born Kiwi with 14 career LPGA wins, including two majors. "And consistency is the biggest thing about playing on the tour for the whole season." 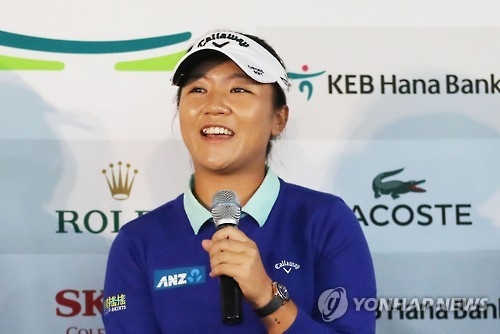 That seems to be almost false modesty, if you consider Ko's track record. This year, she has won four times, including her second career major at the ANA Inspiration, and has posted 13 top 10s in 20 events played, the highest percentage on the tour this year.

There are five tournaments left after this week, and even as the competition for the top individual honor is going down to the wire, Ko said her focus this week and beyond will be on having fun.

Ko said she will try not to get too ahead of herself.

"At the end of the day, the awards and everything else come literally after our rounds," she said. "This has been an amazing journey over the past year. I feel very fortunate to have this experience alongside these top players."

Despite No. 1 ranking, Lydia Ko feels she has room to grow

Despite No. 1 ranking, Lydia Ko feels she has room to grow