And yet the 39-year-old, who will play her final event at home this week, said Tuesday she wants to be remembered for more than just her golfing heroics.

"When all is said and done, I want to be remembered as someone who was widely respected," she said at a press conference ahead of the LPGA KEB Hana Bank Championship at Sky 72 Golf & Resort's Ocean Course, next to Incheon International Airport. It's the only LPGA Tour event in South Korea each year.

"Mr. Arnold Palmer (who passed away last month) did so much to develop the game of golf off the field," Pak added. "And I know I've got long ways to go, but I'd love to be like Mr. Palmer and learn to become someone who can make a major contribution to golf. My goal is to become someone who can be helpful to young players and people around me. I am not interested in fulfilling personal desires."

Pak put together a trailblazing career as one of the first South Korean stars on the U.S. tour. She captured two majors as a rookie in 1998, and her playoff victory at the U.S. Women's Open that year is credited with inspiring a whole generation of youngsters -- referred to as "Se-ri's Kids" -- to pick up the sport. The group includes reigning Olympic champion Park In-bee, an LPGA Hall of Famer, and former world No. 1 Shin Ji-yai.

Pak was the South Korean team coach when Park won the gold medal at the Rio de Janeiro Games in August.

As for the type of contribution she wants to make in her post-playing career, Pak said she wants to establish a system that will allow athletes -- not just golfers -- to focus on their athletic pursuits. 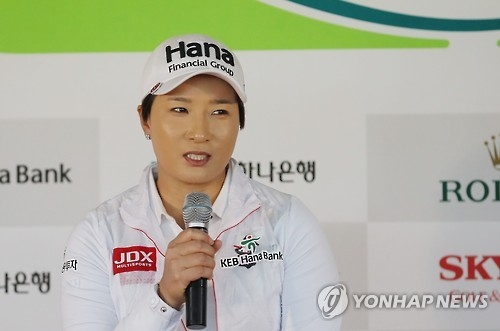 "I want to address things that I, as an athlete, felt could be improved and could be useful for athletes," Pak said. "I want to create an environment where athletes can thrive and compete to the best of their abilities."

Pak has already played her final U.S. event at the U.S. Women's Open in California in July. And her last professional event will be this week, and the organizers have scheduled a retirement ceremony after Thursday's first round.

Mike Whan, LPGA Tour's commissioner who accompanied Pak to the press conference, said the South Korean's impact has been felt well outside her native land.

"At the LPGA, we have a motto, 'Act like a founder, and leave the game in better shape than when you found it,'" Whan said. "No one has lived that motto more than Se-ri. She's the living example. I've read a lot about how Se-ri has created a real explosion of golf in Korea, but that's too narrow. She woke up all of Asia to this opportunity and left an impact that we couldn't have envisioned in 1998."

Whan also said he has seen many players, both young and old, come to Pak for guidance and advice.

Asked what type of advice she usually dispenses, Pak said it has changed over the years.

"Early on, I used to tell players that they had to practice hard and put in long hours," Pak said. "But over the past four, five years, I've been telling them the amount of practice isn't everything. Players are usually tough on themselves. And I tell them to enjoy themselves a little more. I don't have to tell them to work hard. I just have to remind them to take some time with themselves when the work is done.

Pak admitted it still hasn't hit her yet she's merely days away from her last competitive round, but she doesn't have any regrets over leaving the game while still in her 30s.

"I've come a long way, and I want to give myself a pet on the back," she said. "I am really happy because I know all of my hard work has paid off. I've learned so much from golf, and this sport has been the biggest turning point of my life."

Retiring LPGA legend wants to be remembered as 'respected contributor'

Retiring LPGA legend wants to be remembered as 'respected contributor'