SEJONG, Oct. 11 (Yonhap) -- A strike by unionized cargo truck drivers has caused no major disruption in South Korea's logistics transportation, as only a small number of drivers refused to get behind the wheel, officials said Tuesday.

A total of 16 out of 8,377 truck drivers -- including both unionized cargo truck drivers and non-union drivers -- rejected companies' instructions to drive their trucks on Monday, the first day of the strike, according to the officials of the Ministry of Land, Infrastructure and Transport.

They said another 1,426 drivers did not explicitly voice their rejection of their companies' instructions, though they did not drive their trucks on Monday due to personal reasons, the officials said. 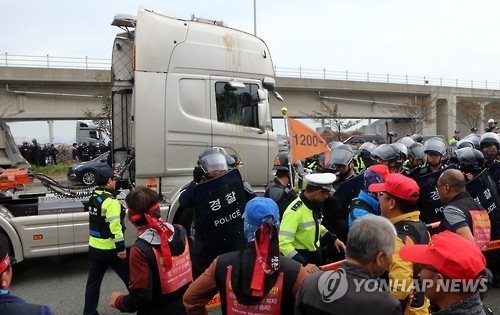 The strike came amid a prolonged walkout by unionized railroad and subway workers.

As of Tuesday, 7,382, or 40.2 percent, of 18,355 unionized railroad and subway workers were taking part in the strike, the ministry said earlier.

The walkout reduced the operation of cargo trains to nearly half of the usual level, forcing local firms to depend on cargo trucks to haul their export and import shipments to and from the country's major seaports.
(END)