SEOUL, Oct. 11 (Yonhap) -- The Kia Tigers won a wild card game in the Korea Baseball Organization (KBO) over the LG Twins on Monday, but that still didn't get them into the next round -- not that it concerns Brett Pill, the U.S.-born slugger for the Tigers.

Now in its second year, the KBO wild card game takes a format different -- perhaps odd in some eyes -- from the major league wild card contest. In the 10-team KBO, the fourth- and fifth-ranked teams collide for the wild card, and the fourth seed has the built-in advantage.

The Twins, by virtue of finishing higher than the Tigers in the regular season, only needed a tie on Monday. Having failed at that, they will get another crack Tuesday, with both of the games taking place at their home, Jamsil Stadium in Seoul.

The Tigers have to win two straight games on the road. A 4-2 win on Monday will be all for naught if they don't beat the Twins again Tuesday.

With a tie in the play, the Twins can potentially reach the next stage with a tie and a loss in the wild card series, while the Tigers could go packing after a win and a tie.

Yet here was Pill, moments before Tuesday's win-or-go home game, shrugging off the whole deal.

"Having to win two games is not a huge uphill battle," he said. "I think it's good that (the Twins) get some advantage from being in fourth. But if we can win today, we'll have some momentum going into the next series, too."

Pill batted second on Monday, and had a pair of hits and scored two of the team's four runs. He's been slotted back to a more familiar third hole in the lineup for Tuesday. 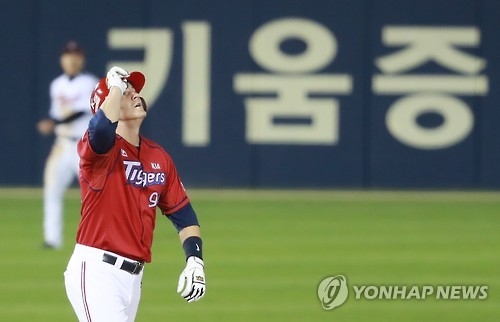 "Whatever the situation comes up, I am ready," he added.

The Tigers played strong defense in the victory. Shortstop Kim Sun-bin made two diving catches to start inning-ending double plays, and catcher Han Seung-taek gunned down a runner at third base after a wild pitch in the eighth inning. The Twins had scored the second run of the inning on that wild pitch, and the play at third prevented further damage.

"In close games, little mistakes sometimes lead to big innings," Pill said. "I figured it was going to be a low-scoring game yesterday, and probably today, too. We have to keep our focus and try not to make mistakes. Hopefully, we can score some runs early. Whoever does fundamentals better will probably win."

The Tigers have long been one of the KBO's most popular clubs on the road, and Seoul has a large following for the Gwangju-based club. Pill said he and his teammates always thrive under their visiting fans' support.

"It's awesome. I've always loved playing here because of that," he said. "When I found out we were having a playoff game here, I was excited."