In a parliamentary audit, Chief of Naval Operations Adm. Um Hyun-seong said that having such assets in the fleet will be "helpful in multiple aspects." He, however, made it clear that no decision has yet been made on the matter.

His remarks came in response to a question by Rep. Kim Hack-yong from the ruling Saenuri Party about the argument for the government to build nuclear submarines to trail and keep close tabs on North Korean ballistic missile subs that can pose serious challenges to national security down the line.

Pyongyang launched a submarine-launched ballistic missile (SLBM) in late August that has been viewed as a success by Seoul.

"To have a nuclear submarine, a set of conditions should be considered by the defense ministry," Um said without elaborating. 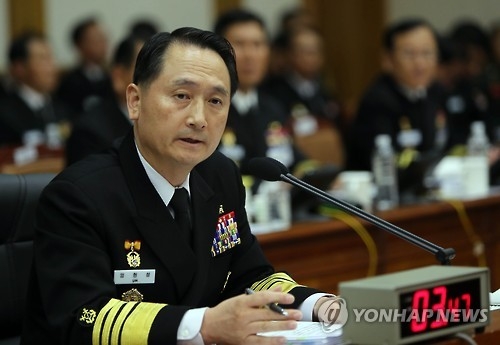 Following North Korea's fifth nuclear test and additional missile launches last month, calls have been growing for South Korea to build a nuclear submarine to better deal with evolving nuclear and missile threats by the North.

On Friday, Joint Chiefs of Staff (JCS) Chairman Gen. Lee Sun-jin said it is necessary for Seoul to review the possible development of its own nuclear submarines, citing the rising provocations from Pyongyang.

Nuclear-powered subs have far greater range and can effectively stay submerged as long as they have nuclear fuel and food.

As for the possibility of installing the SM-3 missile defense system, which has a range of up to 500 kilometers, in the Aegis destroyers to be operated by the Navy, the defense ministry said the JCS are "still in consideration" and had not yet reached a decision.

He expected the decision to be reached in one to two years.

South Korea is seeking to build nine 3,000-ton submarines in three batches as part of its so-called Jangbogo-III project. The move is aimed at building submarines with local technology that can better meet the country's future defense needs.