Kim Yong-eui delivered a bases-loaded sacrifice fly with one out in the bottom of the ninth at Jamsil Stadium in Seoul, sending the Twins to the first round of the Korea Baseball Organization (KBO) playoffs against the Nexen Heroes.

The Twins lost to the Tigers 4-2 on Monday, but by virtue of finishing with a better regular season record, they had another crack at the wild card.

The Twins only needed a tie, while the Tigers had to win again on Tuesday to advance.

The first round series starts Thursday at the Heroes' home, Gocheok Sky Dome, in Seoul.

"Hopefully, this victory will give us some momentum going into the next series," LG manager Yang Sang-moon said. "We have players with little experience, and we've played a lot of tight games of late. Our guys are running on fumes, but we'll try to be ready."

Though both starters, Ryu Jae-kuk for the Twins and Yang Hyeon-jong for the Tigers, threw zeroes on the board on Tuesday, this was far from a classic pitchers' duel.

The teams didn't lack for scoring opportunities, but failed to cash in on them in one maddening inning after another.

Kia third baseman Lee Bum-ho flashed some leather in the bottom of the third to keep the game scoreless.

The Twins were threatening with men at second and third and one out, but Lee Bum-ho dove to his left to snare a hard grounder off the bat of Lee Hyung-jong, saving at least a run. 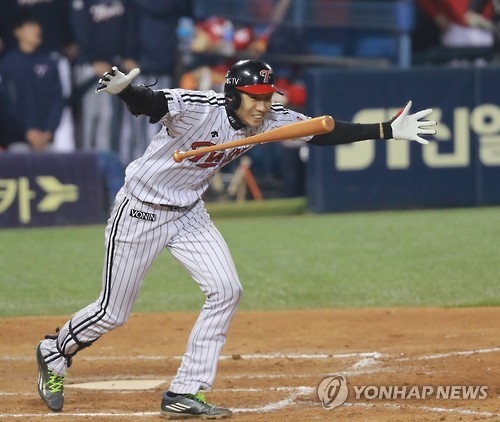 The next batter, Park Yong-taik, hit a soft liner into the foul territory on the third base side, and Lee Bum-ho chased it down and caught it near the bullpen wall to end the Twins' rally.

The Tigers also stranded two runners in the top fourth, as An Chi-hong popped out to short for the inning's final out.

The Twins sought to mount another rally in the bottom fourth. They had two men on after two singles, but Chung Sang-ho struck out looking at Yang's 3-2 fastball.

It was much the same tale in the fifth, as both clubs stranded a man at second base in their respective half of the frame.

Brett Pill finally got the Tigers' first hit off Ryu with one out in the sixth, dumping a double to the right field corner. Ryu then hit Lee Bum-ho for the second time in the game, and put two men on for An Chi-hong for the second time.

An failed to deliver again, as he popped out to first for the final out.

The Twins had men at first and second with one out in the bottom sixth, but all Yang Suk-hwan and Chung Sang-ho could manage was to fly out to right.

The two wasted even more chances in the eighth. With two outs and a man at second in the top eight, LG shortstop Oh Ji-hwan, who committed two crucial errors Monday, made an impressive play deep in the hole, and threw out Na Ji-wan to escape the inning.

The Twins somehow failed to score when they had runners at second and third with one out in the eighth. Chae Eun-seong hit a grounder right at third baseman Lee Bum-ho, and started the rundown that nailed Kim Yong-eui. 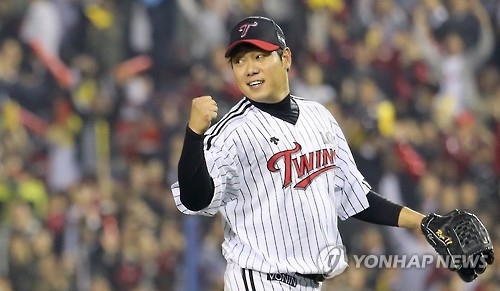 The next batter, Yang Suk-hwan, sent a sinking liner to shallow right in what appeared to be a sure base hit, but Ro Soo-kwang lunged to make a spectacular catch.

The Twins brought the taut contest to its merciful end in the ninth, though it looked for a moment as though the game would head into extra innings.

Following a single and an intentional walk, Moon Seon-jae stepped up to lay down a sacrifice bunt. He popped one behind the plate, and Kia catcher Han Seung-taek made a fine diving catch for the out.

The Tigers relieved closer Lim Chang-yong with Zeke Spruill, who promptly gave up a pinch-hit single to Seo Sang-woo to load the bases.

Kim Yong-eui, who'd entered the game in the eighth, then hit a towering fly to deep left center. Center Kim Ho-ryeong made an outstanding running catch, but he was in too deep to get the winning run at home.

Neither starter factored into the decision. LG's Ryu carried a no-hitter into the sixth, and left the game after eight shutout innings with just one hit and six strikeouts. He issued three walks and hit three batters.

Yang worked around five hits and two walks in six frames, while striking out four batters.