At least on Tuesday it was for vastly different reasons.

The Twins advanced to the first round of the playoffs by walking off on the Kia Tigers 1-0 in the bottom of the ninth. Kim Yong-eui hit the game-winning sacrifice fly, but it was the glove of Oh that helped keep the game scoreless up to that point.

This was the same Oh who committed two disastrous errors in the Twins' 4-2 loss on Monday. Fortunately for Oh and the club, they would get another shot at beating the Tigers thanks to their superior regular season record.

Oh, who has developed a reputation for botching routine plays while making difficult ones, lived up to just that on Tuesday.

In the sixth inning, the Tigers had a man at second with one out and cleanup Na Ji-wan at the plate. Na smacked one up the middle, with the runner at the bag, Brett Pill, getting in Oh's line of sight momentarily. 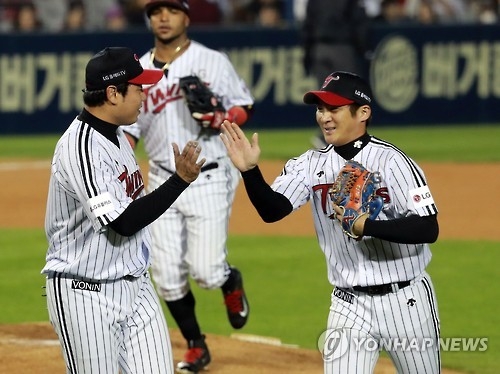 The shortstop quickly dove to his left and snared the ball on a tough hop, and got up to throw out the runner. The Twins escaped the inning unscathed as An Chi-hong popped out to first for the final out.

Then in the eighth, Oh once again robbed Na of a base hit. There were two outs, with a man at second, when Na chopped one deep into the hole between third and short.

Na got to the ball in time, and made a solid throw to first for the run-saving play.

The clubs took turns in wasting precious scoring opportunities, and defense on both ends had as much to do with it as bats that went cold on a chilly evening.

The Tigers received their share of fine defensive plays. Third baseman Lee Bum-ho made a diving grab and a running catch in the third inning alone. Left fielder Kim Joo-chan fell on his back as he snared a soft liner to kill the Twins' fifth inning rally.

The most spectacular play belonged to the Tigers' right fielder Ro Soo-kwang, who lunged to catch a sinking line drive in the bottom of the eighth to strand men at second and third.

The Tigers' efforts, though, were all for naught when the Twins scored the winning run in the bottom of the ninth. And Oh, the biggest scapegoat in Monday's loss, got the last laugh in the victorious dugout.